“We dodged a bullet.”

So says the Louisiana Sweet Potato Commission’s René Simon of Hurricane Laura that struck the Southern Louisiana region two weeks ago. While at the time the storm was predicted to cause the type of destruction inflicted by Hurricane Katrina in 2005, in the end, sweet potato growers in the state seemed to have made it through with little to no damage.

“The hurricane didn’t impact us terribly. It was a huge wind event but not a huge rain maker,” says Simon. “There was some rain but the wind was what caused all the problems with Laura. And sweet potatoes can stand the wind because they’re underground. There is some light damage on some of the sheds but nothing too bad.”
Simon noted that one grower he spoke with who was situated approximately 50 miles out of the eye of the hurricane has begun digging potatoes this week and the crop looks good. “Most farmers have started harvesting or will be soon and it looks like harvest is going well,” says Simon, adding that Hurricane Laura hasn’t even caused a delay in harvest. 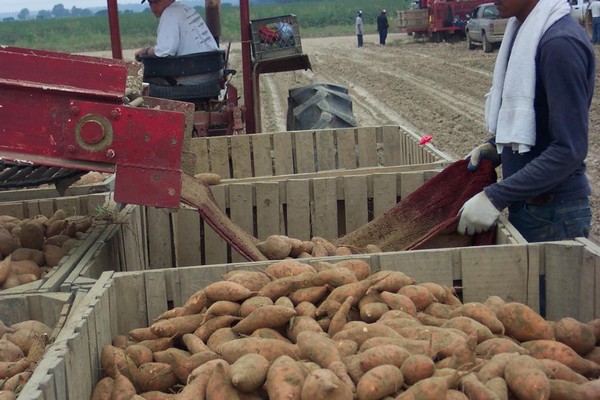 Change from rainy hurricanes
It's a change from recent hurricanes that have hit or travelled through the state. “The past few hurricanes have mostly been rain,” says Simon. “The rain then floods the fields and rots the sweet potatoes.”
It’s a relief to Louisiana sweet potato growers who are already looking at decreased acreage this year. “We’ve seen a slow decline in acreage over the past 12 years or so—people had bad crops or rain, hurricane, floods. I think it was a real mental boost to our farmers to make it through this hurricane.”

That said, Simon says the Commission hopes to see continued strong demand for sweet potatoes, which has been strong throughout the pandemic. “People are eating at home more and buying more and hopefully that will continue until the fall. But on the other side, the restaurant business has been slow and processors have also seen some decreases because of the restaurants,” he says. “But our neighboring states Mississippi and North Carolina have good crops too from what I understand so I think there will be an abundance of sweet potatoes this year.”

Hurricane Sally
As this article is being written, Hurricane Sally is getting ready to make landfall. There is a chance it will hit southeastern Louisiana, but as the storm shifted east on Monday, it placed the coasts of Mississippi and Alabama under a hurricane warning. The storm is expected to make landfall as a category 3 hurricane late today.