Italy-China Forum: a new Silk Road for the fruit and vegetable sector

In the first six months of 2020, China’s imports of Italian fruit and vegetables increased by 74%, while last year a 20% increase was recorded. However, it is also true that Italy accounts for 1% of exports to China. These numbers emerged from the China-Europe debate that kicked off the second day of Macfrut Digital (9 September).

Renzo Piraccini, President of Macfrut, opened the Forum and talked about a “New Silk Road” for the fruit and vegetable sector. ‘These numbers show that the European market has tremendous potential to offer to China. We have set ourselves the goal of creating a logistics hub in Northeast Italy for Chinese agri-food products intended for the European market and turn the platform into a hub for exporting fruits and vegetables to China. It is a great opportunity and we must seize it if we are to further expand this fruit and vegetable market, since 86% of products are intended for Europe. Adequate infrastructure is essential in order to achieve internationalisation.’ 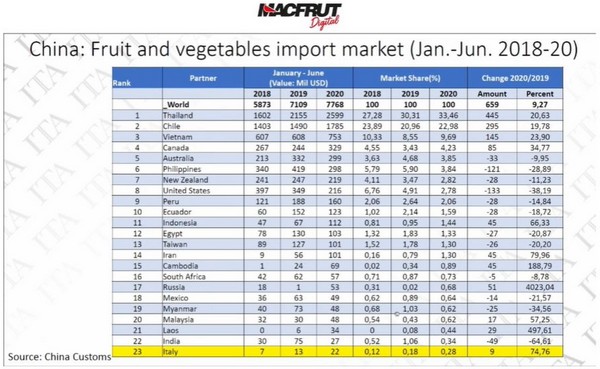 The numbers presented by Gianpaolo Bruno, Director of ICE-Agenzia China - Italian Foreign Trade Agency, support Piraccini’s idea; the Agency believed in Macfrut Digital to the extent that the Chinese delegation is actually the largest at the virtual trade fair, with 87 participating companies. ‘The Chinese market is very vast and diverse. The numbers are impressive: last year, 195 million tonnes of fruits and 200 million tonnes of horticultural products were produced in China. China’s imports are on the rise and are now at $13 billion, with Italy up by 20% with $26 million in 2019. Italy ranks 25th and has plenty of room for growth, as evidenced by the numbers for the first six months of 2020, when a huge increase was recorded, namely +74.7% (China’s imports grew by 9%). The Italy-China balance of trade is still in favour of China (+$105 million), however, we are clearly catching up. As of today, kiwis (96% of the entire market), oranges, lemons, hazelnuts and preserves can be exported to China. We are working towards signing new protocols in order to expand the range of products that we can export.’ 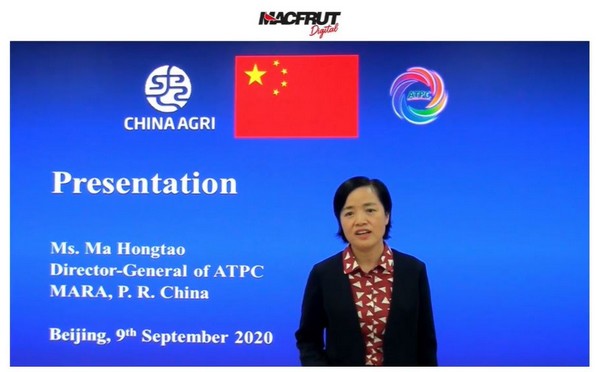 Ma Hongtao, General Manager of the ATPC (Agricultural Trade Promotion Centre), the promotional body of the Chinese Ministry of Agriculture and Rural Affairs, also focused on the theme of the Silk Road. ‘China and Italy have a long-standing history of trade. We have a new mission: to rebuild a new, modern Silk Road as a bridge to connect two distant countries, Europe and China, and the fruit and vegetable sector is a great start to this process. In 2019, China exported over 1 million tonnes of fruit and vegetable products to the EU, 24% of total agricultural exports, including 136,000 tonnes to Italy. Four hundred years ago, the Italian missionary Matteo Ricci travelled to China where he contributed to innovating production techniques and introduced new products. Buried in Beijing, he was a pioneer who sowed a seed that is now bearing fruit in these new relations between China, Italy and Europe in the name of agriculture.’

Paolo De Castro, Vice-Chairman of the European Parliament Committee on Agriculture and Rural Development, talked about the importance of Italy-China relations. ‘The Committee on Agriculture and Rural Development is currently working to expand relations with China and all of Southeast Asia. With regard to relations with China, it is also crucial to bring food safety regulations in line in order to ensure that Chinese products intended for our consumers have the same standards as European products for the Chinese market. More dialogue with China means more opportunities for Italian companies.’ 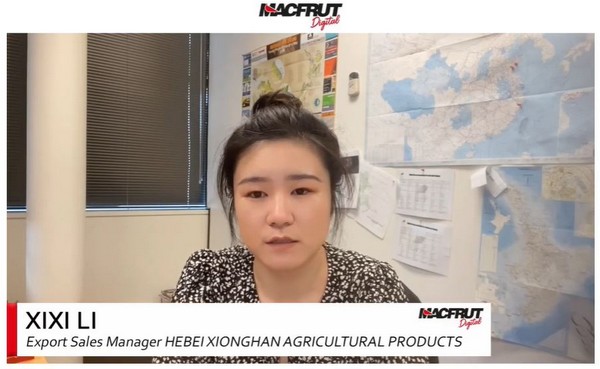 Several Chinese producers took the floor to illustrate the specific characteristics of their companies and of their products: Elvis Lai - a lychee producer, Xixi Li - a fresh pear producer, Anna Zhang, Yang Zong - a tomato paste producer, and Aries - a lemon producer.

Subsequently, a Round table was held, moderated by Luigi Bianchi of Cesena Fiera, with Pino Calcagni - President of Besana group, Andrea Raggi - Export Manager of Canova, and Francesco Zanoni - Export Manager of Delfanti, with the participation of three Chinese sector professionals.