The domestic apple season in the United States has kicked off. In Michigan the harvest started with an earlier strain of Honeycrisp and the variety that starts harvest each year, Ginger Gold. Trish Taylor of Riveridge Produce shares: “We’re about right on time with our annual harvest timing with some varieties off the mark by a few days, hardly noticeable at all. Michigan volume is projected to be on par with the previous season.” 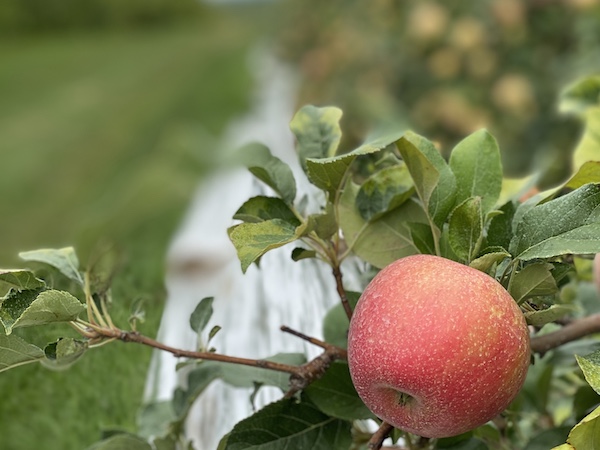 There was some spring frost this year, but fortunately it did not have as much of an impact on the majority of apple production. “In the main apple growing area of the state, known as the Ridge where the majority of Riveridge growers are located, we’ve seen little to no damage from frost. There were pockets of frost impact in the Ludington and Southwest Michigan area, but again, not as much for the fresh market. In general, we’ve had a great growing season with the optimal amount of rain and sunshine,” says Trish.

Riveridge markets apples for a number of growers in Michigan but are also growers themselves.  Taylor tells us Riveridge uses a growing method mostly seen out West, “Nearly all of our orchards have been converted to the v-trellis style of growing for our apples. This has a number of benefits including more production per acre and creating more consistent sunlight through the canopy,” Taylor says.

Gala, Honeycrisp and Fuji remain top three
Riveridge works with many different apple varieties, but the top three varieties continue to be the Gala, Honeycrisp and Fuji varieties. “We’re seeing some newer varieties gaining traction, like Evercrisp and Ambrosia,” says Taylor. “Ambrosia will increase in popularity as more growers are able to plant the variety. But my new favorite is Evercrisp. It’s a variety developed out of Ohio that’s found success with our climate here in Michigan. It’s a cross between Honeycrisp and Fuji that eats sweet like Honeycrisp but has the great storage and longevity like Fuji. They’re a great winter apple – taking you right back to harvest in flavor when you have one in February.”

As the domestic apple season kicks off, retailers are excited to bring in the fresh crop, according to Taylor. “Especially when the fall weather hits, you have to be ready and set in the stores. Like our projected cooler weather this weekend, it is an instant trigger to put on a hoodie sweatshirt and get your apples and start baking. But you have to be in store and ready for that push because you never can predict Mother Nature.”

Riveridge also have their own cider facility, where they turn many of the varieties into a flavor-specific blend.