The Haskap berry has quickly grown in popularity in recent years. Although the elongated berry is native to North America, it wasn’t available on larger scale until 10 - 15 years ago. “They were mainly grown in the wild until the University of Saskatchewan started breeding a new variety with a better flavor, higher yields, and increased disease resistance,” says Samuel Côté with Haskap Producers out of Quebec, Canada.

While Haskaps are still a fairly new crop, they can now be found across the United States and in almost every province of Canada. The majority of the Canadian crop is grown in Quebec and British Columbia. In these two provinces, the Haskap industry is well established, but the berry is also grown in Canada’s other provinces. Côté, one of the first growers of cultivated Haskap berries in Canada, started cultivating Haskap berries in Quebec back in 2007. “Following these initial years, the industry saw major growth between 2012 and 2015 and these new plantings are starting to bring volume now,” he mentioned. 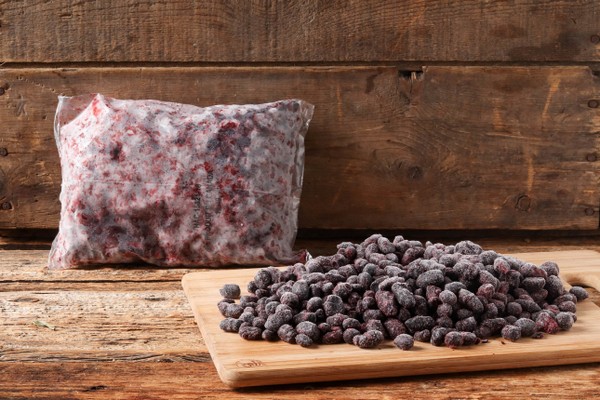 Grower’s organization for frozen Haskaps
Even though Haskap berries are increasingly available fresh, the recently formed Haskap Producers group targets the frozen segment. “We represent a group of 50 growers, almost all from Quebec,” said Côté. Together, we produced about 55 tons of Haskap berries last year and this year’s production volume was similar. After harvest, the berries are all processed at a nearby freezing facility and distributed to customers domestically as well as abroad. “About 70 percent of our frozen berries are sold in Canada and the remaining 30 percent is exported to Japan, the United States, and Belgium,” he added.

Popular ingredient
“The frozen segment really has taken off due to the berry’s versatility, which offers endless opportunities for product innovation,” shared Côté. They are used as an ingredient in yogurts and jellies, but also in pastries like muffins and pies. In Poland, Haskap berries are freeze-dried and sold as a powder that provides vitamins for smoothies, yogurt, and cereal. More recently, Haskap berries have gained popularity as an ingredient for beverages. Microbreweries are selling Haskap beer all across Canada, but the berries are also used in wine, spirits, and juices.

Haskap berries used as an ingredient in beers, jellies and powders.

Unique flavor, deep color and health benefits
Why are Haskap berries such a popular ingredient? “This relatively new berry has a unique flavor, generating interest from foodies,” said Côté. It has a higher sugar content than wild blueberries and is less tart than cranberries. Some people call its flavor a mix of blueberries, raspberries, rhubarb and black currants. In addition, just a small volume already adds great color to any product. Their deep dark purple inside makes them very colorful and on top of that, they are very healthy. Haskaps have a high value of antioxidants and according to the Journal of Functional Foods, they have anti-inflammatory, anticancer, anti-diabetic, neuroprotective, as well as cardioprotective benefits. “They are unique and different from any other berry and our French saying ‘Cultiver sa difference’ captures it all: cultivate your difference.”