The pomegranate trade is currently underway in the Northern Hemisphere. The campaign has already kicked off in Spain, Morocco, Egypt and Turkey. In North America, California has already started harvesting. The Southern Hemisphere stopped shipping pomegranates earlier this year, so the European market has been virtually empty in recent weeks; therefore, the prices are high. This should change with the arrival of larger volumes from the Mediterranean. In China, the market is stabilizing after a particularly chaotic period, and in South Africa, new plantations are already being set up in the northern provinces to make it possible to reach the market earlier than the Western Cape. 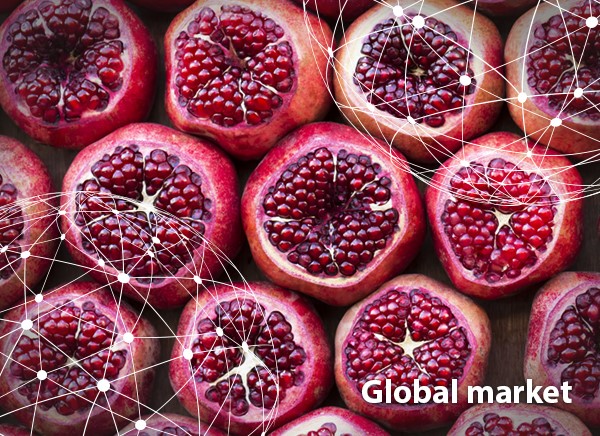 Netherlands: Good demand for first Turkish pomegranates
The first Turkish pomegranates are arriving in the Netherlands this week. An importer says that they are starting with the early variety Caner, which will be followed by the thicker variety Hicar in about three weeks. “We expect a good season. The supply is greater this year and there should be plenty of large sizes. In the spring it was very hot for a few days, so there was some sun damage, but luckily this happened so early in the season that those pomegranates could be cut out and the others had more room to grow. The demand is very good. There are also pomegranates from Spain and Egypt on the market, but these are completely different varieties. Turkish pomegranates are received with enthusiasm by our customers. Prices stand at around 2 Euro per kilo,” says to the importer, who mainly sells the fruit to German wholesale customers.

Belgium: Pomegranate sales are still slow
Pomegranate sales are currently somewhat slow. Many are waiting for the Wonderful variety to really get started with larger volumes. The varieties available on the market at the moment are a bit more difficult to sell. During the start of the Israeli pomegranate season, there were some issues with the larger sizes. The Spanish season has also started, but the supply of the earlier varieties is somewhat limited. IN general terms, the pomegranate season won't really get started until the Wonderful hits the shelves. Egypt is also on the market. The quality of the pomegranates currently on offer is mediocre, according to a Belgian importer. Prices were on the high side two weeks ago because of the cost of air freight from Israel. The Israeli campaign of the fruit arriving by ship has now started and prices amount to around € 10 per kilo.

Germany: Pomegranate on the rise as a convenience product
In Germany, Spanish and Moroccan pomegranates are currently available. Wholesale prices stand at around 10 Euro per 4 kg. The first imports from Turkey are expected next week.

Pomegranates have been steadily gaining ground in the German market in recent years. Until a few years ago, the fruit was mainly regarded as an exotic, but nowadays, pomegranates are available almost all year round. This is naturally resulting in new 'trendy' product concepts. For example, the Fresh Factory company from Hamburg recently announced that it is going to supply pomegranate seeds in handy To-Go packaging. "We are the first company to process the pomegranates in Germany, which allows us to supply a fresher product," says the company's management.

Spain: Yield per hectare down by 30%
The harvest of Spanish pomegranates has started in the south of Spain and is now also underway in Alicante and Valencia. The first pomegranates to be harvested are the red varieties, which have both an intense red skin and red seeds. In week 37, the harvest of the pale and sweet pomegranates will also start, and the Mollar, the most popular variety in Spain, will follow in October.

The yields per hectare have been reduced by 30% this year. The first Spanish pomegranates arrived in an empty market, as shipments from the Southern Hemisphere stopped practically 2 weeks earlier and the harvest in other Mediterranean countries was delayed by 8 to 10 days. In fact, Israel, a major producer and consumer, is devoting its entire production to the domestic market and won't be a major competitor to Spanish pomegranates this year. There is high demand for the fruit, with consumption still on the rise every year. Prices so far are much better than last season and growers hope these will make up for the lower yields and higher production costs caused by the pandemic. The rain and heat waves caused problems with the fruit's peel in some growing areas. Moreover, there are large differences in fruit sizes because of the rains.

Italy: New season started
The pomegranate season in Italy seems to have had a good start, both due to the advance of about two weeks and for the volumes available. Prices are comparable to those of the previous season. The early varieties Shany and Emek are now available, together with the fruit from India and Turkey, particularly the Acco, Smith and Parfianka varieties. Spanish and Egyptian pomegranates will also arrive soon.

Current healthy food trends, boosted by the coronavirus crisis, will certainly have an impact on the market. Despite their lower purchasing power, consumers are increasingly aware of the healthy properties of products. The early ripening and quality are making it possible to sell the most valuable fruits of the Acco, Smith and Parfianka varieties for prices ranging between 1.15 and 1.30 € / kg.

Egypt: Start of the campaign delayed by two weeks
According to the General Organization for Export and Import Control in Egypt, the country's pomegranate production will reach 247,000 tons this year. Europe and Russia are currently the main destinations, especially at a time when Spain and Turkey have yet to supply large volumes. The demand for the Wonderful variety from Egypt is higher than last season. Normally, there isn't any demand until early October, but this year there have been pomegranate orders since mid-August. However, the harvest of some companies was delayed by about two weeks. Prices are expected to come under pressure with the entry of other producing countries, such as Turkey, Israel and Spain.

India: Smaller supply of large sizes
The Indian pomegranate season lasts until October. It has been difficult to get larger sizes this season, but the overall yield has been satisfactory. The weather has had a positive impact on both the production volume and the coloring. The fruit has a great appearance and the demand is fairly stable, possibly even higher than last year. Sales are expected to be higher than normal, given that the logistics are back on track. India's main markets are in Asia, Europe and even Canada. Prices for the normal sizes are stable, but the larger fruits are more expensive due to the low supply. The current season will finish in October and the new one will start in January.

South Africa: New plantings in northern provinces
In South Africa, the first pomegranates of the new season will be harvested around January-February 2021. New trees have been planted in the north of the country, mainly with the idea of obtaining an earlier production than that of the Western Cape. The cold temperatures may delay the new harvest, but it is still too early to be certain. In any case, rainfall in the Western Cape has resulted in better soil conditions. Growers have invested in soil improvers, and given the abundant rainfall they hope that these investments will pay off in the new season.

United States: Strong harvest due to mild summer, price level comparable to last year's
California is about to start the pomegranate season with a great harvest. The fruit has benefited from the mild summer in production regions such as the San Joaquin Valley. There's a wide range of sizes, with lots of size 32 and above, which is in high demand. The harvest will start with the early varieties Foothill, Smith and Early Wonderful in mid-September. The Wonderful will arrive in early October and the packing will continue until bad weather hits sometime in late November. "The market is healthy. There is a good demand for both exports and domestic supply, with the demand for the latter expected to be similar to last year's," says a grower. However, buyers are still needed for the smaller sizes, which could be used for promotional purposes, to explain what to do with the product to new customers.

Prices are expected to be similar to last year's; however, labor costs have risen in California. It is hoped that the sector won't be losing any acreage, even though this could also lead to a more active market, as the demand from the juice processing industry is growing.

China: Chaotic market, but with the prospect of stabilization
Tunisian seedless pomegranates have become very popular in the Chinese market in recent years. Wholesalers rushed to enter the pomegranate market with their products and that sometimes led to chaos.

Last season, some growers, without proper knowledge of harvesting technology, grew pomegranates and harvested the fruit early, causing confusion in the market, as the product quality and the price were not in balance. The coronavirus has brought some stability to the market. Market conditions are expected to improve even further. The price started low, but it is expected to increase this season.