For the first time the phytochemical composition and antioxidant activity of three extra early clementine varieties (Citrus clementina Hort ex Tan. cv. Basol, Clemensoon and Clemenrubí) natives from Spain have been characterized. The work has been performed by scientists of Universidad Complutense de Madrid and Instituto Politécnico de Bragança. 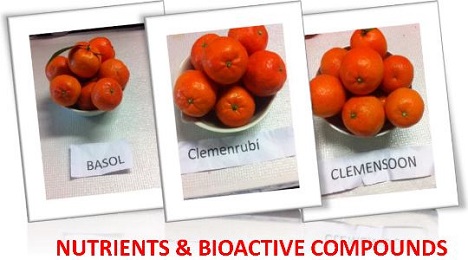 These clementines are a relevant source of bioactive compounds, such as vitamin C (values around 80 mg/100 g), allowing to satisfy the recommended daily intake with the consumption of a normal portion. Sucrose is the most abundant sugar, and potassium the main mineral while manganese is the least. Fat content is very low (<0.5 mg/100 g), with palmitic acid and α-tocopherol the most abundant fatty acid and vitamin E form, respectively. Flavonoids are the predominant phenolic compounds, with narirutin/naringin and (neo)hesperidin the best represented ones. The antioxidant capacity evaluated is similar to that reported in other citrus fruits.

"It is important to highlight the presence of relevant levels of vitamin C (mainly ascorbic acid) that allow meeting the dietary reference intake of this vitamin through the consumption of a normal portion of any of the studied clementines (around 75 g) - the scientists explain - These varieties also contained relatively high levels of total dietary fiber, with outstanding levels of the insoluble fraction in Clemenrubí variety. These clementine varieties are revealed as good sources of bioactive compounds with potential promoting health benefits that could be of great interest for the food industry in order to develop foods enriched in natural compounds as well as to improve food antioxidant capacity".