Spanish and Italian peaches and nectarines predominated, French and Greek ones had at most a complementary role. Locally, deliveries from France ended during the week, which marked the end of the season. Also the deliveries from Spain and Italy were apparently limited. But they were sufficient to satisfy the interest. This was not particularly pronounced, a certain customer saturation was noticeable. The dealers reduced the supply: they were at least able to maintain their previous prices in some cases.

Discounts contributed to a brisker turnover. The quality sometimes left a lot to be desired: In Munich, this mainly concerned Italian and Spanish offers, in Frankfurt Turkish offers. In Berlin the articles from Turkey were very large, the 4.5 kg crate was filled with only 8 fruits. In the capital, the assortment first became more expensive before it became cheaper again on Thursday. 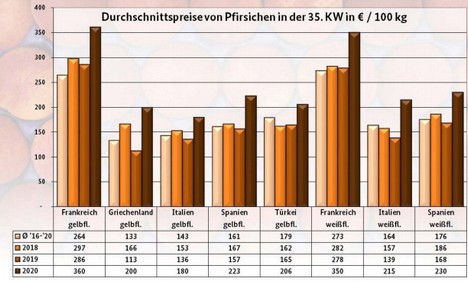 Apples
Native feeders dominated. The accommodation facilities were too small for the extensive tributaries, so that evacuation did not work out without restrictions. As a result, prices dropped overall.

Table grapes
Turkish Sultana dominated and became cheaper in some places due to extensive supplies. A thoroughly friendly demand and a supply that was matched to it supported the prices.

Lemons
Spanish articles dominated the events before South African and Argentinean ones. The demand was generally not very strong and could be met without effort.

Bananas
On the one hand, the cooling of the weather intensified the interest. However, since the influx from the ripening plants was relatively high, no price increases could be established.

Cauliflower
Local shipments dominated. There was a quiet demand, which could be satisfied without difficulties. The quality was not always convincing.

Lettuce
Iceberg lettuce came mainly from Germany, while Dutch additions occurred only occasionally and in small quantities. In unexcited trading, the prices mostly remained at the previous level.

Cucumbers
In the case of the snake cucumbers, the availability of domestic, Dutch and Belgian batches was limited. However, this did not have a fundamental effect on prices. Nevertheless, the prices fluctuated, depending on quality and demand.

Tomatoes
Although deliveries were limited, the supply was still too extensive. Virtually all varieties were therefore at a lower price. Especially the prices of panicle products dropped.

Sweet peppers
Dutch shipments predominated, followed by Turkish and Polish ones in terms of importance. Business was quite uneven and valuations developed accordingly.