The cucumber market has achieved good prices in recent weeks and this may continue. The big question is whether it can compensate for the coronavirus losses, according to traders Bruno Vuerinckx, Nick Rietveld, and a Belgian grower.

“Cucumbers were among the biggest victims of the corona crisis,” said Bruno Vuerinckx, sales supervisor for all fruit vegetables except tomatoes at BelOrta in Belgium.

With a cucumber price of 42 cents on the Belgian clock, the sector has no reason to complain these days. “Prices have actually been between thirty and forty cents for two months,” says a grower from the Roeselare region who says he's happy with prices above 25 cents. “But the minimum price varies according to one's costs. We grow without lighting and have largely paid off the greenhouse.”

Cucumbers grow quickly. Photo right: cucumbers in the greenhouse at one of the growers who sell at The Greenery

Acreage and supply declining
The good flow in the cucumber sector is also observed by BelOrta. “There is demand again, while the supply is declining,” according to Vuerinckx. He expects this upward spiral to continue. “In the coming weeks, many of our growers will switch to the autumn cultivation of vine tomatoes, which will reduce the cucumber acreage. And this is good for the price.”

For Nick Rietveld, salesman at The Greenery, this is still up in the air. "The supply can get smaller, but if the demand doesn't cooperate, the price can simply remain moderate.” He agrees that the supply of cucumbers is declining. “Growers who cultivate under lights in winter are preparing for the last few weeks with unlighted cultivation. This reduces the supply.”

Young plants took a hit
The cucumber specialist also predicts the warm August days will impact the volume. "Due to a number of very hot days, young plants have been hit hard."

According to him, this problem occurs mainly in the south of the country, where the crop rotation is traditionally applied in July-August. Due to the heat damage, production will probably be slightly lower.

Rietveld has also seen a recovery in the market in recent weeks, but he's not enthusiastic. "It's a bit better, but nowhere near as good as last year when we had periods with daily prices of seventy or eighty cents." 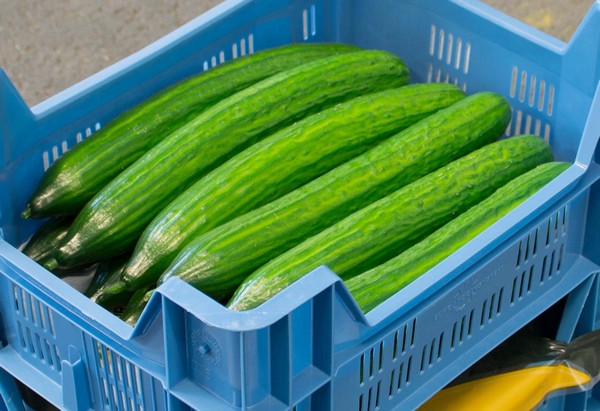 Downturn due to closure of restaurants and markets
It therefore is quite uncertain whether the current prices can make up for the whole cucumber year. The sector went through a tough period from April, during which batches were destroyed and prices did not exceed fifteen cents for a long time. Corona caused a huge blow to demand. "Cucumber was one of the biggest victims of the coronavirus and the closure of the restaurant industry, markets and wholesale," says Vuerinckx. "It is used in all salads and sandwiches, after all."

In contrast to a slump in demand, there was a greater supply. “There is more supply from the Netherlands, because many tomato growers have switched to cucumber cultivation,” he says. "Our cucumber acreage also increased by five percent to 101 hectares." According to Vuerinckx this was mainly thanks to the entrepreneurial spirit of the grower.

But, he says, there was even more going on: “We had a good spring with high temperatures and a lot of sun. This caused an increase in production.” These factors together explain the dumping prices in the spring, according to Vuerinckx and Rietveld.