Sales and marketing manager Rebecca Scurr said the early arrival of big fruit could be attributed to growing conditions at Wamuran, south-east Queensland last summer when the spring crop was flowering.

"When pineapples flower, conditions determine how many individual eyes are set, then as fruit matures, the eyes fill out. This season, many pineapples have a lot of individual eyes. This is not unusual for spring, but explains why consumers will see bigger fruit now and for a while," she said.

"Regular rainfall at the critical flowering stage has influenced both size and eating quality, which is excellent," she said.

The average size of a Piñata pineapple is nine, with each about 1.5kg. However, until October, Piñata expects more size fives and sixes, averaging about 2.8kg each from its main growing region, Wamuran. 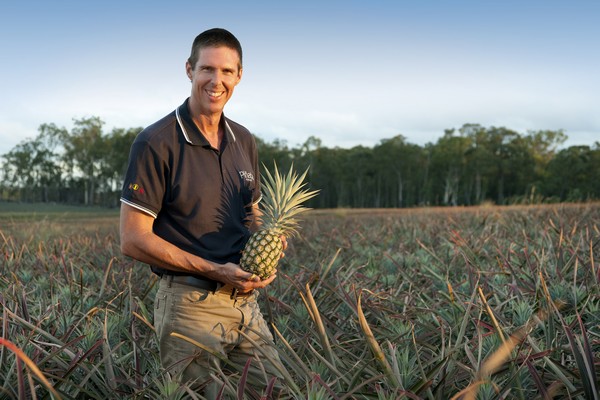 General manager tropicals, Stephen Scurr who oversees production at all three Piñata pineapple growing regions - Wamuran, Mareeba in Far North Queensland and near Darwin in the Northern Territory, said other factors influencing size included the health of the plant at planting and crop density.

"The wider the spacing, the bigger the fruit. Generally, bigger plants have more stamina and can get through the cooler months better. Getting the moisture balance right is important. Pineapples need enough to keep them alive but not too much that they have wet feet," he said.

"At Wamuran, we predominantly plants tops collected from pines from the previous harvest. At Mareeba where there are several months between picking and planting - too long for many tops to be viable - we use a mix of planting materials including plants grown on a nursery block, pups collected from the mother plant and tops," he said.

Piñata has more than 6.5 million pineapples under cultivation at Wamuran and 5.5 million at Mareeba which will begin harvesting in October. Harvesting in the Northern Territory will resume in January. Piñata pioneered production at Mareeba in 1996 and at Darwin in 2015.

Piñata pineapples are distributed to some 18 supermarket distribution centres around Australia every day of the year and are available at leading supermarkets nationally.

"At a time when consumers are thinking about their health, it's a great time to buy a big pineapple," Ms Scurr said.

"Pineapples ripen from the base up and are picked at the peak of ripeness. As they don't ripen after picking, we go to a lot of effort to pick ripe fruit, including taste-testing in the field."