Dutch company has a total solution for potato sorting dust

In the past, you’d get your hands dirty while sorting potatoes. Nowadays, during this process, a cloud of fine dust drifts through the air like a grey mist. This is released in large quantities during fully automatic sorting. The Dutch potato cultivation company, De Lugt, was recently on the market for a new sorting line. So, they asked Jongejans to design a total anti-dust solution that puts an end to this murky haze. 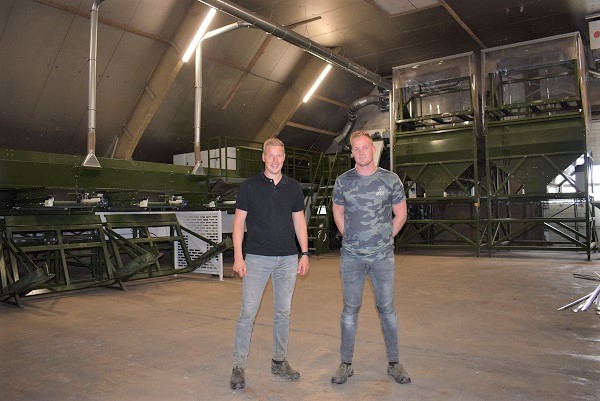 Last year, De Lugt decided to invest in further mechanization. This decision was made as a result of the shortage of labor. De Lugt is a true family business and dates back almost 100 years. In 1928, great-grandfather, Cor de Lugt, arrived on the Dutch island of Texel from the Hague.

He became a farmer and evolved into a smart, skilled businessman. “He built a large warehouse that could store considerable quantities of potatoes. It boasted the first weighbridge on the island as well as the first oil fuel tank. He also automated many things.” That’s according to fourth-generation De Lugt cousins, Matthijs and Bart.

The company specializes in, among other things, growing seed potatoes. Yields of the correct sizes and disease-free cultivation are vital. In the early days, they developed sorting machines in-house. In 1983, the third generation of De Lugts switched to a then-innovative mechanical sorting method. The machine vibrates, causing the potatoes to fall through correctly sized openings. Potatoes are dry, so they release a lot of fine dust. After 34 years, the staff at De Lugt had gotten used to this. But, nowadays, they use an optical sorter; so this cloud of grey fog is a thing of the past. 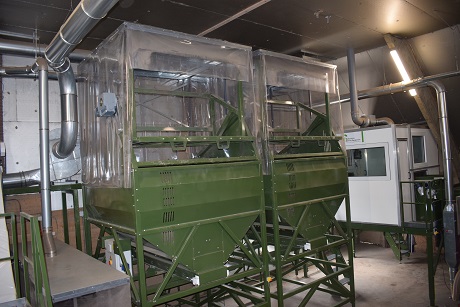 Yet, there’s still some fine dust floating around while the potatoes move along the sorting line. That causes a few issues in the machine’s optical section. That’s why Jongejans was called in. They had to take care of the dust and dirt that collected during the sorting process’ various steps. They also had to ensure optimal air quality in the warehouse (see insert).

Dust-free sorting process
Once harvested, the potatoes are dried out, crated, and kept refrigerated. When further processing is required, the crates are dumped in a bunker and sent, via a conveyor belt, to a so-called hedgehog belt. That removes any coarse dirt, straw, and clods. The spuds are then distributed to the optical sorter.

Jongejans encapsulated these bunkers and hedgehog belt to screen off the dust sources and prevent air pollution. A technique called Windshifting is employed before the potatoes reach the optical sorting machine. This method combines blowing and extracting air, resulting in an extremely clean product flow.

In the optical sorter, it’s crucial that the air is dust-free. The machine can then grade the potatoes correctly. Good extraction is, therefore, vital. After the potatoes have passed by the cameras, a stream of air blows to the correct outlet. The fine dust released in this process is removed via an extraction system. It's then returned to the room as clean air.

That ensures both a pleasant working environment and a dust-free space. The cousins consider this a significant improvement. “Mechanical sorting was always very noisy, with that ever-present grey cloud. Now it’s quiet. And we have fresh air.” 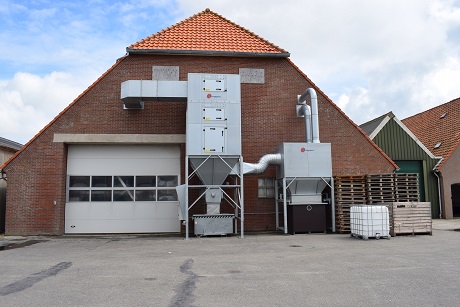 Fine dust reduced by 95%
Jongejans gave De Lugt a complete extraction system for its optical potato sorting line. It not only has a central extraction system. The system also boasts dust screens, a lint trap, and it uses Windshifting technology. A PGF unit filters all the extracted air. This unit consists of filters and a near-silent, highly efficient fan. These are automatically cleaned with compressed air.

The PGF, therefore, doesn’t lose its suction power. The clean, filtered air is fed back into the room. That means heat is retained. This kind of extraction ensures a 95% reduction in fine dust and allows the sorting machine to operate. If the dust wasn’t extracted, it would hamper the capturing of good images of the potatoes defects. And so, it would be impossible to sort them optically.