"Scientists in Cornell’s NextGen Cassava project have uncovered new details regarding cassava’s genetic architecture that may help breeders more easily pinpoint traits for one of Africa’s most vital crops.

Their findings are reported in a study published July 31 in Plant Molecular Biology.

The scientists analyzed large breeding populations measured extensively over successive years and stages of selection in multi-environment field trials in Nigeria. The genome-wide association analysis explored genomic regions most responsible for desirable traits in cassava, a food crop that provides the main source of calories for 500 million people across the globe.

The scientists found more than 40 quantitative trait loci associated with a total of 14 traits, responsible for characteristics such as disease responses, nutritional quality and yield. The traits were classified broadly into four categories – biotic stress, quality, plant agronomy and agro-morphology. 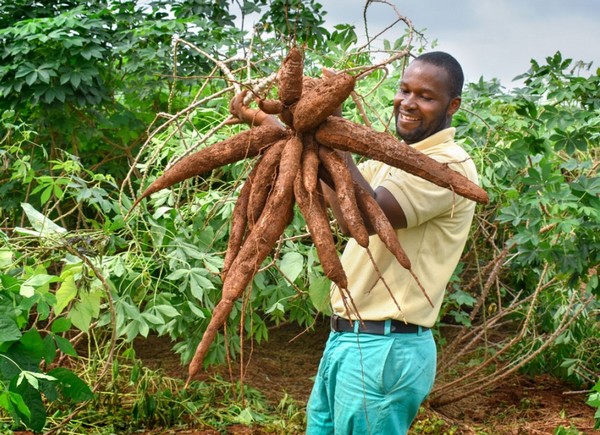 “Our findings provide critical new entries into the catalogue of major loci available to cassava breeders,” said Ismail Rabbi, a molecular geneticist and plant breeder at the International Institute of Tropical Agriculture (IITA) and a member of the NextGen project. “These markers should greatly improve cassava research and provide another powerful tool for the breeders’ toolbox.”

“Cassava is an incredibly useful food and industrial crop today and will be more so in the future as climate change reshapes agriculture everywhere, but first we must better understand its complex genome,” said Chiedozie Egesi, NextGen program director and co-author on the study.

Based in the Department of Global Development, the NextGen Cassava Breeding project supports scientists from many disciplines with advanced technologies and methods. The project works to empower smallholder cassava farmers in sub-Saharan Africa by developing, releasing and distributing improved cassava varieties.

Plant diseases and pests like cassava mosaic disease (CMD) and cassava green mite are major constraints to cassava production in Africa, India and across Asia, including Vietnam and Thailand. Infections of CMD can lead to yield losses of 82%, or more than 30 million tons each year.

“A complete understanding of cassava’s genetic architecture is the critical step needed to accelerating genetic improvement and bring lasting benefits to farmers and consumers who depend on this crop for food and income throughout the world,” said Egesi, who’s also a visiting scientist in the Department of Global Development and an adjunct professor of plant breeding and genetics in the School of Integrative Plant Science, in the College of Agriculture and Life Sciences.

Data from the study was made freely available through several commercial genotyping service vendors. The scientists plan further studies using germplasm from other regions, including East Africa and Latin America, which they say should bolster the catalogue of major effect loci available for molecular breeding.

NextGen Cassava is funded by the Bill & Melinda Gates Foundation and by UK Aid, a British government initiative.

Matt Hayes is associate director for communications for Global Development in the College of Agriculture and Life Sciences."

By Matt Hayes for Cornell University