A report by Apal

The announcement followed a National Cabinet meeting, during which it was also agreed to come up with a plan to allow farmers to cross state borders more easily within the next two weeks.

APAL has been looking at the issue state by state across the country:

Western Australia
Nardia Stacey, Executive Manager at Pomewest, says that while COVID-19 cases are low in the west, stringent border controls complicate matters when it comes to accessing labour.

“It’s certainly the priority issue that faces the WA pome industry at the moment as we head to prepare for the next thinning and harvest season,” she said.

“We welcome the announcement of the continuation of the Seasonal Workers Programme exchange in the Pacific by the Federal Government last Friday. We believe that it is a state by state decision to opt in, and the current indication we’re getting from the WA government is that they won’t be opting in favour of attracting local workers for this work.

“Some of our larger growing enterprises have signed up to this program and are very happy with the skilled labour and resources that have been developed.”

Nardia said there is concern over whether there would be enough willing locals to pick the fruit, but said it was a great opportunity for Western Australians in need of work and called for the Government to incentivise the work in order to attract more.

“We are concerned that Australian workers just aren’t that interested in this sort of work, we are keen to continue to work with the State Government to highlight the issue seeking support to co-ordinate and streamline a co-ordinated approach for businesses to share resources, harvest teams and timetabling as a way to manage the situation.

“We are encouraging the WA pome growers to register their labour requirements on recruitment platforms and agencies so we can understand the situation better.”

“We’d also be calling for incentives to make sure that we get as many as we can. It might be a reduction of HECS or making sure you still get job seeker if you do a block of work.

“Ultimately we would love to see as many Australians as possible working on orchards during the next harvest.” 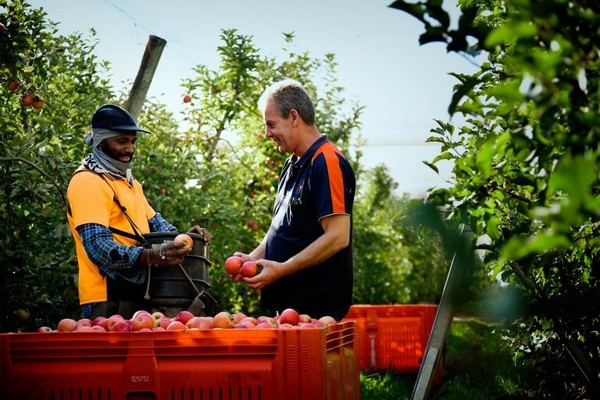 New South Wales
The NSW Government is imploring it’s residents to ‘get off the couch’ and make the most of the thousands of agricultural jobs that are available.

The ‘Help harvest NSW’ webpage has been created as a one-stop shop for those looking for workers or work in rural NSW.

Jobs are listed for fruit picking as well as in sales, research and development, marketing and merchandising for horticulture and agriculture.

“Farmers are desperate to find contractors and employees willing to work to make the most of the bumper harvest we’re about to have,” NSW Minister for Agriculture Adam Marshall said in a recent statement.

“Due to COVID-19 international travel restrictions, there simply isn’t the number of farm workers the industry needs at the moment.

“I want to see more Aussies climb off the couch and get out into the regions where there’s plenty of good-paying work on until the end of the year.”

“Our member survey indicates that 90 per cent of farm businesses on the NSW-Victorian border have felt an impact from the border closure with 66 per cent of our members needing to cross the border on a more than weekly basis,” Pete said.

“The flow of labour and machinery and contractors is national…we look forward to working with the NSW Government and the Agriculture Minister on having input into this code.”

Queensland
Queensland representative state bodies have been encouraging growers to use the Harvest Trail website to connect with workers, and vice-versa.

Peak state body Growcom has also been encouraging growers to take time to understand their obligations as businesses, given the state Government’s COVID-19 compliance checks that have been taking place.

Acting Growcom CEO Richard Shannon said that although the recent travel exemptions to allow critical workers to travel interstate was important, so too was the need for workers considered unskilled to move between states.

“The horticulture industry in Queensland has absolutely no interest in bringing people into the state who may have COVID,” Richard told WIN News yesterday.

“We’re not confident there’s going to be enough people, so we need some more options on the table.

“Some critical workers with specialist skills are able to move between borders, but we still haven’t got something that allows for unskilled who do picking and packing work.”

Queensland grower and APAL board member Rosie Savio said growers are concerned about workforce shortages, but said the SWP announcement on Friday was positive, as long as those coming in from the Pacific Islands could quarantine for a couple of weeks.

“It’s a big problem, and its obviously very hard to get domestic workers,” Rosie said.

“If we can get them in through the SWP and find a way to make sure they quarantine for a few weeks, that will definitely help.”