When Hurricane Laura hit the Caribbean this past weekend, it was only a tropical storm. Still, there was damage to crops and infrastructure, and there were even several fatalities. Since then, Laura turned into a Category 4 hurricane that made landfall near Cameron, Louisiana early Thursday morning. Since then, the storm has weakened to Category 2. The extent of the damage in Louisiana and Texas is unknown yet, but more than 457,000 customers in the two states were without power early Thursday morning. 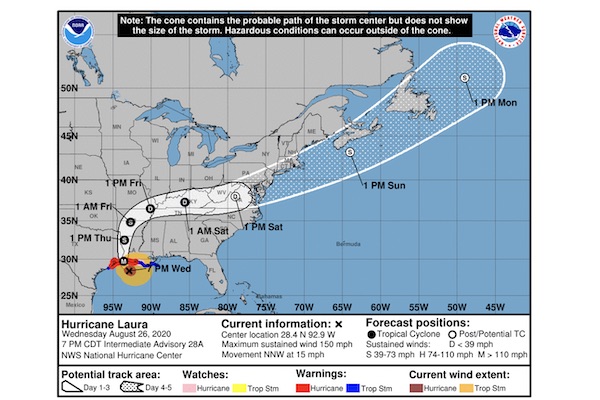 The ports in the area have taken precautions, and temporarily halted operations for the safety of their team members. Port Houston released a statement declaring that all Port Houston offices and terminals will remain closed Wednesday, August 26, 2020 and Thursday, August 27,2020. For the Port of New Orleans, as of Wednesday August 26th, at 1:30 pm the New Orleans Cargo Terminals remain at normal operating levels and container terminal operations and Breakbulk operations also remain open. The Port’s website also states that “Per the US Coast Guard at 1200 CST, Port condition YANKEE is in effect for the entire New Orleans zone, thus boats and pilots have mobilized to resume vessel traffic as conditions allow.”

Sealand, a Maersk shipping company, also issued a customer advisory regarding the storm, saying: “As we continue to monitor Hurricane Laura and Post-Tropical Cyclone Marco, the safety of our teams and cargo operations remains our top priority. We want to keep you informed on a frequent basis about how the storms may affect your supply chain on the U.S. gulf coast. Our operational team is in constant touch with the US Coast Guard and Port leaders to ensure the latest updates.” Delays are expected for many of the company’s vessel operations in the area.