"I am experimenting with new growing techniques that have given phenomenal yields on trees that are only three years old," Mr Russell said. "I am trying new ideas, new varieties, and looking at the research into the health benefits of anthocyanin-rich red plums. Last year’s fruit was great eating and showed that quality plums will get a good uptake. And that has to be good for everyone."

Growing plums on 13,000 trees, the Hawke's Bay grower is supplying one of the nation's newest varieties Flavour Blast, to complement his other traditional varieties. 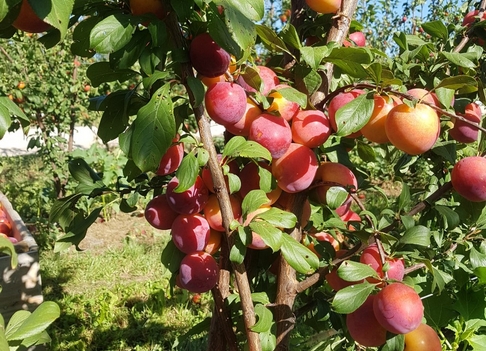 After the premature end to the last season, New Zealand plum growers are hopeful of a longer season for 2020-21.

"COVID-19’s arrival towards the end of summer and the Government’s decision to put the country into lockdown, which closed most businesses and schools, severely reduced the number of fresh produce outlets able to supply fruit to consumers," Summerfruit NZ vice chairman, Roger Brownlie said.

In terms of exports, plum sales are well down from the 60 tonnes reported five years ago but they may be at the start of an upwards trajectory. Last season exports jumped to just over 29 tonnes compared to just over 21 tonnes exported at the end of the 2018-19 season, with the USA being the main market for the fruit.

Plums are mostly, a North Island crop, with Hawke’s Bay providing the first and last varieties with Central Otago helping out in the February period.

Last year the fruit tended to escape the hailstorm in the region, that affected other stonefruit varieties and had some big crop loads. This is the only crop that had a lower average wholesale price than last season.

The wholesale price of plums remained relatively similar throughout the season, with the only significant drop off in mid-February. The average farmgate price for the entire season was $3.49, slightly down on the 2018-19 season. Retail prices also were up for the start of the season, compared to the previous year, before dropping under $6 per/kg to end the season. However, there was a slight increase on the previous year, in terms of the average price.