In 2015 the youngest generation of the Räss family business decided to enter the berry cultivation. Only a few years later, the company has become the leading producer of all organic berries in Switzerland. The willingness to innovate is the key to the company's success, says co-managing director Simon Räss: "With its innovative cultivation technology and a complete range of products, the company is unique in Switzerland." 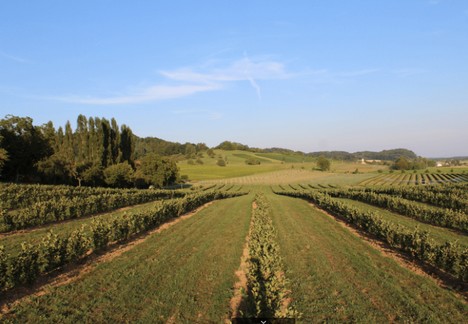 Today, on 36 hectares (almost half of which are under protected cultivation), all kinds of berry crops are cultivated, from the common earth, raspberry, blueberry and blueberry to the less well-known goji, chokeberry and maize berries. "We started five years ago with the niches in berry cultivation, but over the last 2-3 years we have also included the larger crops in our range and have greatly expanded our cultivation capacity," Räss, who runs the facility with his brother, says. 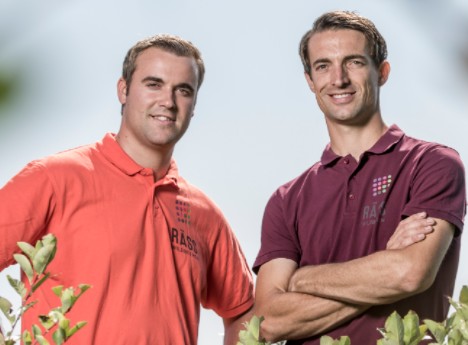 Fresh Swiss berries are harvested from mid-April to December.
In the picture: Christoph & Simon Räss.

Use of bumblebees in cultivation
The latest milestone of the company since this year is the use of bumblebees during the cultivation process. "We have been able to integrate this process in close cooperation with the Canadian company Bee Vectoring Technology and we have recently received the required approval". The use of the insects is only possible in the tunnel systems, but the system has many advantages. "Important for us is the reduction of CO2 emissions. If there is an optimal, dry spring, this system can even work as a solo strategy without further measures. In our strawberry plants, the bumblebees will spread the fungus Clonostachys, which fights Botrytis." 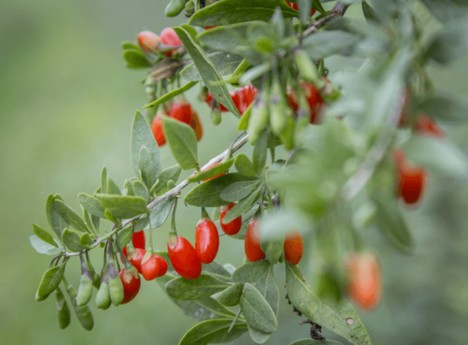 The general conditions in Switzerland make organic berry cultivation particularly complicated. The soil is not very suitable for berry production, but cultivation in pots is not permitted.
In the picture: Goji berries on a bush.

Organic berries are trending
The family business in the canton of St. Gallen has adapted its product range to the needs of the retail trade. It supplies branches of the two leading supermarket chains Migros and Coop throughout Switzerland, as well as organic reform stores and specialist wholesalers. "We are observing a great demand for organic berries that has remained unmet for a long time. There is currently a huge boom in blueberries in particular, both conventional and organic. Large fields have been planted to meet this demand in the future. We are seeing smaller growth rates for raspberries, for example", says Räss.

View of the Aronia field

Currently, the total capacity of the company is 36 ha of berry cultivation. "In terms of area, we have not planned any further expansion. Instead, we want to intensify our cultivation. For example, we can only supply strawberries in the early and late time slots, but not in June and July. In other words, we want to produce more fruit in tunnels instead of outdoors and thus extend our delivery window."