Chile’s apple exports down 10% this year

Last week’s USApple Outlook 2020 included forecasts and overviews of various apple producing regions around the world. The Southern Hemisphere is an important region that helps to supply the northern hemisphere apple stocks during the spring and summer months. Rene Alarcon, Commercial Manager of Döhler North America Fruits and Vegetables, provided an overview of the Latin American apple production. 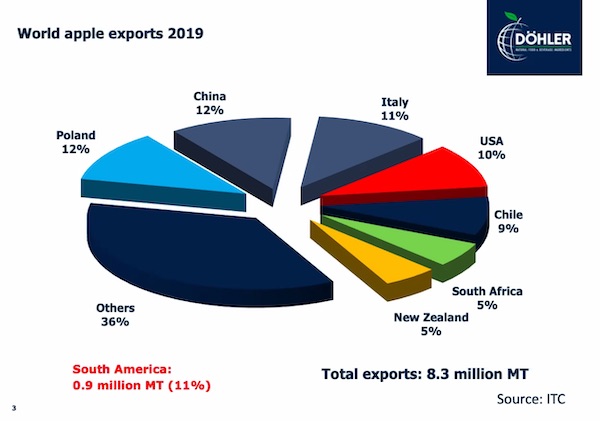 Argentina and Brazil: Main markets are domestic
Besides Chile, the main apple producing countries of South America are Argentina and Brazil. For Argentina, the fresh apple exports have been decreasing over the past years, but the 2019 numbers were up 20% from those of 2018, according to Alarcon. He shares: “While this was an improvement, the overall exports are down 40%. The main varieties grown in Argentina are the old traditional varieties such as Red Delicious and Granny Smith which is the main reason that Argentina isn’t as strong as it used to be in the international market. The total production of 2019 according to WAPA is around 550,000 metric tons, of which over 100,000 tons were exported.” The main export destinations for Argentina are Brazil, Russia, and the Netherlands. 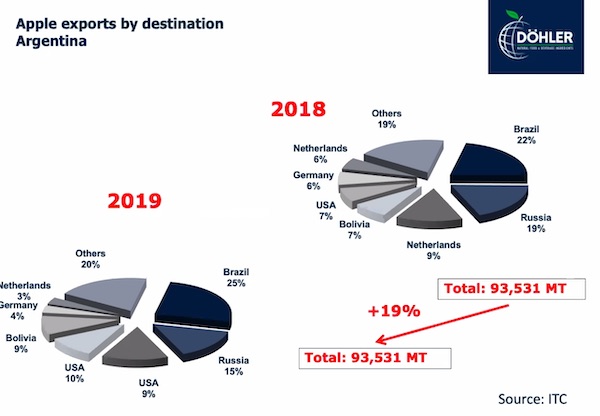 For Brazil, the production for 2019 was around 1.1 million metric tons, with only around 57,000 tons exported to their main destinations of Bangladesh, Russia, and Ireland. “The exports of this year have been pretty steady, only down 1% over last year. The country’s imports went up by 28% this year, but this is over a small volume: having gone from 28,000 to 36,000 metric tons,” says Alarcon.

Chile: Exports down 10% this year
Of the main apple producing countries in Latin America, Chile is the only one with a major export market. “Chile comprises 2% of the world’s apple production, and 9% of the apple exports in 2019,” Alarcon shares. “Exports are the main activity of the apple production in Chile, though the exports were down a bit in 2019 with the numbers falling around 725,000 metric tons. To put it in perspective, the peak exports were in 2014 with 820,000 metric tons. The total production for this year, according to the WAPA estimate is between 1.6 and 1.7 million metric tons.” 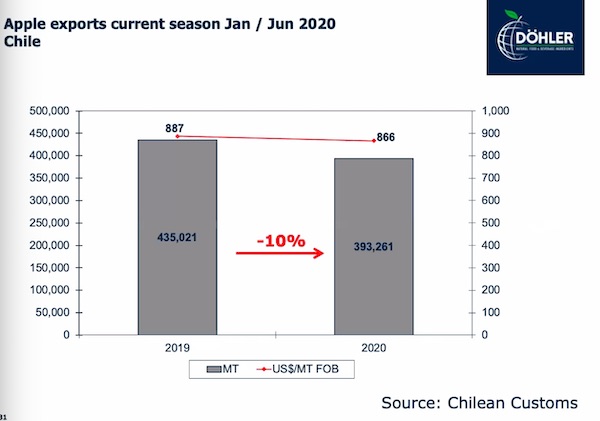 Chile cultivates approximately 32,000 hectares of apples, with 61% of all production taking place in the Maule region. Between 2014 and 2019, there has been 13% reduction in the surface area of apple cultivation, according to Alarcon. Of the different varieties being produced, he says: “Royal Gala is still the largest variety, coming in at 45% of the production. Richared Delicious and Granny Smith comprise around 10% each. One of the reasons that Chile is doing much better compared with other Latin American apple producers in their exports is because of their focus on the new varieties over the traditional varieties, which see much higher demand in the market,” Alarcon explains.

Chile’s exports are very diversified, which is also one of their strengths. “The market is very well spread out,” Alarcon says. “There’s not one market that the biggest by far, though lately there’s been a higher concentration of exports to South American countries which wasn’t there before: Colombia, Peru, and Ecuador are showing up strongly and taking in a bigger share of the exports.”