Sweet and sour cherries
Turkey has always ranked among the top cherry producing countries worldwide. It's also one of the four largest cherry exporters in the world. They cultivate sweet cherries in mainly central Anatolie and Marmara. There are farms in the Turkish Mediterranean region too. And they grown them near the Aegean Sea. Within these regions, Konya, Izmir, Manisa, and Denizli are the most significant cherry-growing provinces.

Cherry sales begin in April. The total 2020/2021 production of sweet and sour cherries should rise to 918,000 tons. That's according to the Turkish Statistics Office (TurkStat). Of this total, 732,000 tons are sweet cherries, and the remaining 186,000 tons, sour. Cherry farmers in the most important areas are generally satisfied with this year's quality and yields. Some orchards however, sustained hail damage. These are in certain areas of the Bursa and Kutahya provinces. 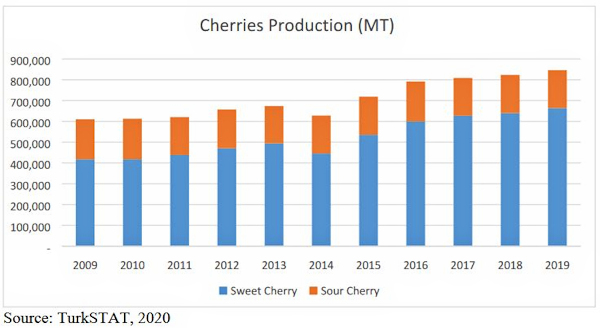 Peaches and nectarines
Globally, Turkey is still one of the top ten peach and nectarine exporters in the world. These products are mostly cultivated in the Bursa, Canakkale, Izmir, and Mersin provinces. These fruits are generally harvested between April and the beginning of October. According to TurkStat, total peach and nectarine production will increase. In 2020/2021, it will be 870,000 tons. That's 40,000 tons more than the previous year. These fruits production has been steadily climbing for a decade.

There were favorable weather conditions during these products' flowering and harvesting periods. That ensured good quality. Several peach varieties are grown in Turkey. These are the Early Amber, Spring Crest, May Crest, Red Haven, and Early Red. 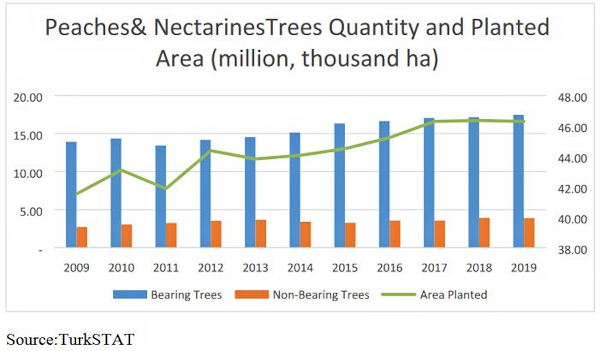 Turkish peach production keeps increasing. That's as a result of new investments in the export market and juicing industry in the last decade. The planted acreage remains the same. This was about 46,000 ha in 2019/2020. In 2019, there were around 21 million peach and nectarine trees in that country. That's according to Turkish statistics. The number of fruit-bearing trees has risen from 14 million in 2009 to 17,4 million in 2019.