“The coming season promises a clear apple and pear market”

As part of the USApple Outlook 2020 Conference, which took place last week on August 20th and 21st, Phillipe Binard of the World Apple and Pear Association provided an overview of the past and upcoming European apple season. The overall estimate for this 2020 European season is 10.7 million tons, spread across 21 participating countries (including the UK). The season is forecast to begin five to seven days early, and it looks like the bulk of the volume will have large sizing. 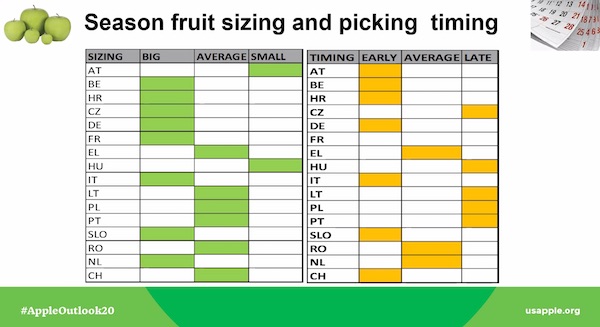 2019-2020 season overview
Like the rest of the world, the apple industry felt the impact of the pandemic this past season. Binard shares: “The three main trends we observed were that there were good domestic sales, stable imports from the southern hemisphere, and a significant decline of the export to certain countries. We also saw increased costs of production due to the pandemic, and higher consumer demand. The consumer shopping habits changed, with higher demand for products with a long shelf-life, lower frequency of purchases, and higher demand of local, organic, and packaged products. It will remain to be seen which of these trends might continue on into this season, and which ones will fade away. Additionally, in the coming season we will likely encounter a significant economic crisis, which will also influence the consumer purchasing habits.”

Pricing in the past season has been really good, Binard shares. “Remarkably, for the first time the price of the Polish apples rose quite high. There were points in the season that even saw prices equal with the Italian prices. This is a trend that will likely continue on to this new season, too,” he says. 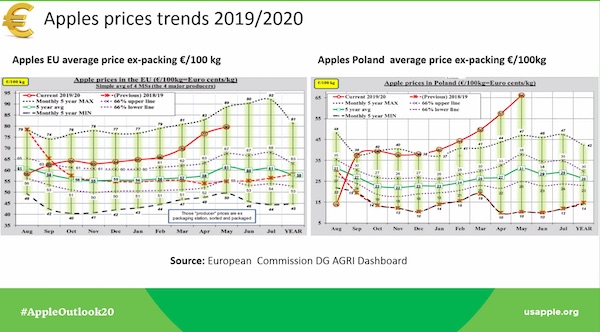 Upcoming 2020-2021 season
This year’s apple crop is ranked moderately low in the decade ranking, about 4% below the 10-year average. “This is partially because France, Spain, and Portugal had a bumper crop last year, which often leads to lower volumes the following season,” says Binard. He adds: “During the growing season this year, there have been several weather events that could have impacted the crop. There was a very mild winter across Europe, but there were several frost episodes in late March and in April which had an impact on the apple crop. This summer, there were heatwaves and droughts in many regions, and this also had an effect on the crop.” 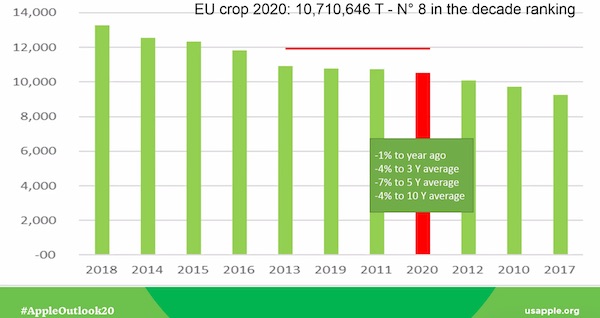 Overall, the coming season promises a clear apple and pear market. “There will be a higher pear crop, due to partial recovery in Italy. Most of the apple orchards will be ready to pick their fruit about a week earlier than average, and the overall sizing looks to be large,” Binard says. “With regard to the different varieties, this will be the first year the Golden Delicious will be below 2 million tons. The Gala, on the other hand, continues to increase and will reach a peak crop this year. The Jonagold and Jonagored varieties are slowly declining, with the Jonagold variety being down more than 20% this season. The new varieties, meanwhile, continue to increase.” 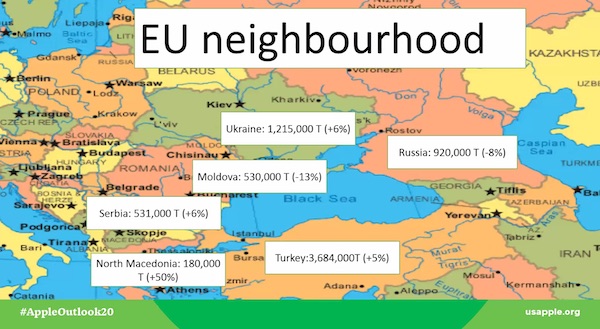 Concerns for coming season
While there are always challenges throughout the seasons, this year is unique because of the pandemic. “One of the concerns is the availability of workers this season for the harvest. The European Union is working to move workers to where they’re needed, all within the European Union, but there’s a lot of demand from Morocco and Ukraine too. There’s definitely a number of difficulties to securing the workforce, which could have an impact on the picking.”

Organic production currently makes up around 5% of the total volumes. One concern expressed by Binard is that of the move of the European Union toward increased organic production. “There is a big discussion surrounding the Green Deal, and Farm to Fork strategies and the EU would like to have 25% of the total production land dedicated to these. The issue with this is that the production needs to meet the demand of the consumer and there’s going to be a discrepancy between the two. The push of the government isn’t matching the reality of the market.”

Overall, the volumes, sizing, and quality of this year’s crop look good. There are a few questions with regard to what the market will look like, especially due to the uncertainties of the pandemic. “We had very good sales in from March through May because of the pandemic, so the big question is if the industry will be able to hold on to this for the new season,” Binard concludes.