In July this year, soil moisture improved - but not so much that the agricultural drought ended. 10% of the country's area is still endangered and heavy storms do not improve the situation on the rivers.

Low water levels were observed in 51% of water gauges in the hydrological monitoring network. The rainfall totals recorded in July indicate rainfall deficits (SPI-1 index) in the Western Poland belt, i.e. in the following voivodeships: Lubuskie, Dolnośląskie, Wielkopolskie, and in the north-eastern voivodeships: Pomorskie, Warmińsko-Mazurskie, Podlaskie. 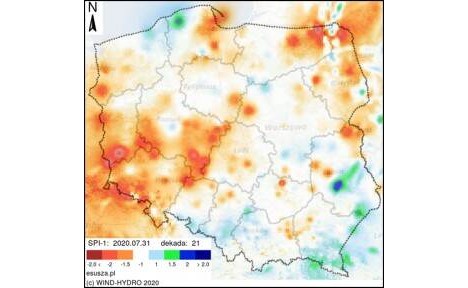 The rainfall distribution forecast by IMWM-NRI in August 2020 shows the highest probability of monthly precipitation "above the norm" in the deficit provinces (Lubuskie, Dolnośląskie, Wielkopolskie, Pomorskie, Warmińsko-Mazurskie, Podlaskie) and in places in Silesia. Precipitation "below the norm" is forecast for the following voivodeships: Świętokrzyskie, Podkarpackie, Małopolskie, and also locally in Mazowsze and Lubuskie.

East and West
The abundant rainfall recorded in the south of the country translated into a clear increase in soil moisture in mountain and foothill areas, as well as in the Lublin region. In the rest of Poland, soil moisture at a depth of 28-100 cm remains unchanged (compared to last month). As at the beginning of summer this year, for more than 10% of the country, soil moisture does not meet the water needs of plants (water deficits in the root zone).

The soil moisture status forecast for August by the European Drought Observatory (EDO), compared to the multi-year data (reference period 1995-2019), will be below the norm in the coastal strip in the Lubuskie, Małopolskie, Mazowieckie and Warmińsko-Mazurskie voivodships. With persistent heat waves and lack of rainfall, water retention in the soil will significantly decrease in those regions of the country where low soil moisture is already recorded.