Haith has had a long relationship with WM Morrison Produce Plc already, but it was in June 2017 that the supermarket set the company its biggest ever challenge. Realising that the layout of its Rushden factory was impacting on efficiencies, WM Morrison Produce’s head of operations Jason Kelly and managing director, Andrew Thornber arranged to meet Haith’s sales director, Duane Hill.

“We had designed and installed many previous projects for Morrisons in the past, and they were very pleased with them and the increased efficiencies we achieved for them,” explains Duane. “This time though the project was much more extensive and a lot more complicated. Morrison’s wanted to modernise their Rushden facility, increase their potato packing capacity, improve product quality, grading accuracy and minimise forklift movements.” 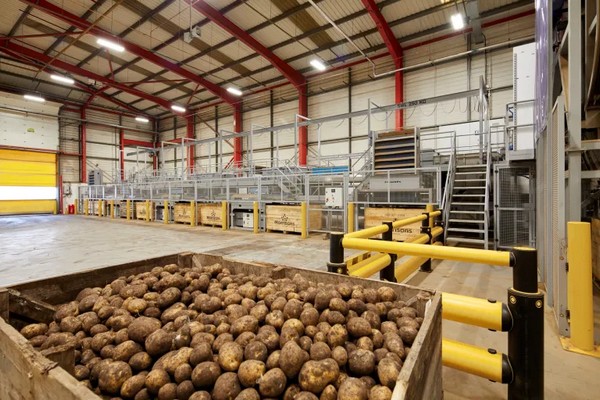 After visiting the site, Haith’s design team soon saw that the flow of the site was slowing production down. The offices and storage areas were located in the middle of the factory and were disrupting the flow of produce from intake to packing and loading.

Potatonewstoday.com reports that, following several weeks of planning and refinement, Haith created an entirely new factory layout. Nine processing lines were removed, and seven wash lines were replaced with just two. The new lines represented a significant increase in throughput, being able to handle 30 tonnes per hour each compared to the previous lines limited capacity.