Turkish and French apricots dominated over Spanish and Italian goods. Native and Polish offers were only found sporadically. The supply was limited. The unimpressive demand could be satisfied without any difficulties. Only Berlin reported quick turnovers. In the capital, Turkish sugar apricots were now offered in 350-g bowls, which were added to the already established 5 kg crates.

As a result of limited availability, prices mostly remained at last week's levels. Here and there, traders were even able to correct their prices upwards, for example in Frankfurt, where first the Italian and Turkish lots became more expensive, later followed by French lots. The quality of the fruit there was seldom top notch, In Munich, Turkish batches were completely absent, as the producers in the home country achieved higher prices and therefore refrained from exporting. 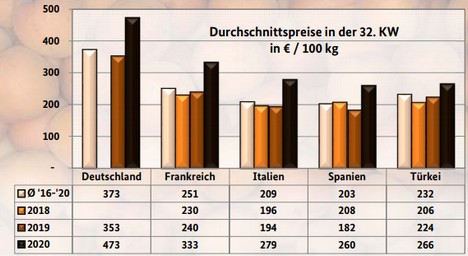 Pears
Santa Maria pears came in from Italy, which in the meantime were also handled in 10 kg crates. Just like Williams Christs, they replaced the Carmens, whose relevance was limited.

Table grapes
Italy dominated the diversified range. A nice demand was to be found, due to the summer weather. Prices did not change significantly, as the demand was sufficiently satisfied.

Strawberries
Despite the midsummer weather, customers often did not take up the offer as often. The ratings could only maintain their previous level if the organoleptic characteristics of the products were very convincing.

Cherries
The campaign was clearly drawing to a close, as both deliveries and demand fell noticeably. In principle, the assortment consisted only of domestic and Turkish batches.

Peaches and nectarines
Spain and Italy dominated events in this segment. The availability was a little limited. Demand was disappointing in some places, but was nice in others; the main focus was on the larger calibres.

Plums
Local articles dominated the shops, with Hanita, Cacak's beauty and first Tops being available first. All in all, a large number of varieties could be accessed.

Lemons
South African and Argentinean Eureka and Spanish Verna formed the basis of the assortment. Although availability had decreased, it was sufficient to meet the demand.

Bananas
Marketing was rather relaxed here: on the one hand this was due to the holidays, on the other hand it was because of the heat. In addition, customers focused more on refreshing summer fruit in line with the weather and the season.

Cauliflower
Domestic deliveries dominated events. Since the availability was limited, demand could no longer always be satisfied.

Lettuce
For iceberg lettuce, it was almost exclusively German offers that were available; Dutch goods were rare and not available on all markets. In most cases, demand was satisfied without problems. Nevertheless, prices sometimes trended upwards.

Cucumbers
The supply of cucumbers consisted of German, Dutch and Belgian goods and was generally somewhat limited. All in all, prices showed a downward trend.

Tomatoes
Dutch, Belgian and local fruits formed the basis of the assortment. The supply decreased, but was sufficient to satisfy the demand. On the one hand, the summer weather stimulated demand and on the other hand, the number of shipments increased.

Sweet peppers
Goods from the Netherlands were dominant in this area. Domestic goods were very expensive and therefore mostly only of importance for the specialist retail trade. The Dutch batches often became more expensive, sometimes quite sharply.