There's a section in ZON magazine called 'The client has the floor'. For a recent edition, this Dutch publication interviewed Dirk Willem Blijleven. He was appointed as the new Chief Commercial Officer (CCO) at Total Produce (TP) Haluco on 1 February. 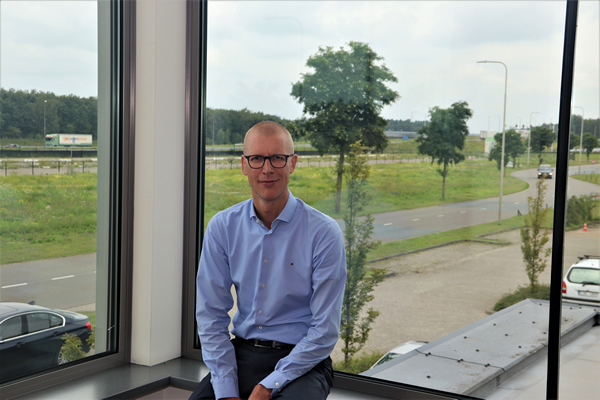 Dirk Willem was born and bred in Barendrecht, the Netherlands. So, it's no wonder he's been familiar with the fruit and vegetable world since childhood. "Familiar with, but as a teenager, you're not really involved with it. My world revolved mostly around cycling. I've been doing this at a high level for more than 20 years, even semi-professionally for a time."

"But, that doesn't change the fact that I've been working since I was ten. Back then, I had a side job at a bakery. It started by accident. I helped out collect a birthday cake and hauling a few things around. I got paid five guilders, a bag of rolls, and a free cake at the end of the day. I kept working there until I was 18. That's how much I liked the baking world."

"I think that also explains my lifelong passion for nutrition and food. That's something I'm, of course, keenly aware of because of my cycling. I'm even fanatical because I, for example, have eaten hardly any fries for 20 years now. My wife and children don't know me any other way. I always pay attention to that. When I stopped competing, I had to gradually 'normalize' my diet. That's partly why I feel so comfortable in the fruit and vegetable world, with its healthy products."

Dirk Willem chooses his words deliberately, just as he's done so far in taking steps in his career path. "I completed my foodstuffs vocational training. At 18, I found myself at Hagé International. That was thanks to a call from my father. I spent six years there in various roles. It became clear to me that my strength lay in strategic thinking. And considering a company's future. I then moved to the world of plants. I worked at, among others, Intergreen, a subsidiary of the Dutch Flower Group. I wanted to expand my horizons. That took another six years, and I enjoyed it there."

"I then joined Driscolls, a soft fruit company. I had some difficult years there. At that stage, there were a series of transitions and takeovers. Then, I spend two years at the Israeli citrus company, MTEX. I then joined Aldi Nord. It's a good company. And a perfect place to get to know the retail sector from the inside out. I was able to experience the other side of things. I was a Buying Manager there. So, I was responsible for everything fruit and vegetable-related. From fresh to canned and frozen."

Global player
And then, after nine years, the step to TP Haluco followed. "It's a perfect match for me. Certainly, because it's backed by a global player like Total Produce." TP controls Haluco, thanks to its shares in the company. Does this give the ambitious CCO enough room to move? Or are the Irish pulling the strings? "No, I can say, emphatically, that Haluco has a lot of maneuverability. They can, in principle, determine their own course," says Blijleven.

"And within Haluco, the same applies to me. Our vision is stated on our website. It says we want to make a difference in the area of health, food security, and sustainability. These aren't really distinguishing factors anymore. So, one of the things I must consider is how we can make more of a specific difference. We must distinguish ourselves even better. That includes taking a good look at our sourcing. Because, of course, last year, we left Van Nature (now Oxin, ed.)."

Blijleven is pleased with Haluco's current sales mix. They supply from retailers and day traders to the trade and catering sectors. "We're best known in the sector for, especially, Dutch greenhouse vegetables. We're perfectly placed to work at the ZON auction. So, we can fulfill certain retail programs for our clients," explains Dirk Willem.

"It often surprises me that the auction remains such an important reference point. That's for price formations throughout the trade sector. That's still a relatively puzzling phenomenon to me. Sometimes less than five percent of the national daily supply of a certain product is at auction. When that price then goes up, after 08:30, all prices go up spontaneously. That's still extraordinary to me. It's like the auction clock's secret power."

Love
Dirk Willem's ambition and passion for work pale in comparison to his love of cycling. "Jan van der Lugt is one of Haluco's owners. When he saw I was going to work at the company, he said to me, 'either you'll stay here until you retire, or you'll leave because you got a professional job in the cycling world'," he says, laughing. "So, he saw the same thing in me that you do."

"I'm going to cycle the 'Everesting' soon. That's a cycling event where you cycle up and down a mountain. You do so many times until you reach the same climbing distance as the top of Mount Everest. I'm going to do that in the Vosges. It's 8,848m up the sides of the Ballon d'Alsace. I'm going to cycle it eight times to reach that goal."

'As a hobby', Blijleven even holds a position on the Southern France cycling team's board. That's in the Toulouse region. There he busies himself with, among other things, getting sponsorship. The famous Laurent Jalabert started this team. "The plan is to go to Toulouse about four times a year. But, of course, due to the coronavirus outbreak, nothing's come of that this year."

Speaking of the coronavirus - how did Haluco deal with it? "We divided the commercial team into two to minimize the risk of infection. It doesn't work entirely flawlessly, but it's perfectly workable. Regarding retail sales, we had huge plusses, just like most suppliers. But, when it comes to the hospitality industry, it was, of course, dismal. Below the line, you will, however, certainly not hear me complain," Dirk Willem concludes.