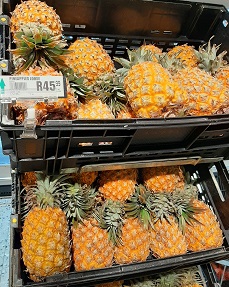 Pineapple growers never expected to be a big beneficiary of the alcohol ban as South Africans turned to brewing pineapple beer but now it is widely speculated that South Africa's alcohol ban will be coming to an end soon.

Right: R45.99 (2.24 euros) for a single pineapple at a Gauteng retailer yesterday

The ban was instituted to reduce alcohol-related injuries, thus freeing up hospital beds, but the period has been devastating, from an agricultural view, to wine grape, hops and barley growers.

In April and May demand for pineapple was "wild" and "hectic", according to a pineapple trader, exacerbated by a shortage caused by hail and sunburn damage. This time around the price spike has been milder but still greatly higher than prices last year this time.

At some retailers pineapple prices have been sluggish in following the downward trend (see photo above).

"Pineapples have never been as popular and the growers are smiling," says a Bathurst pineapple grower, who tells of a hawker who has started specialising in pineapples for Cape Town. He has been visiting Bathurst two or three times a week for the past few dry months, taking away as much as 28 tonnes of pineapples at a time for the Capetonian informal trade.