Citrus growers in south Texas are faced with with huge losses in the aftermath of Hurricane Hanna.  Orchards in Edinburg are largely dried out now after flooding as a result of Hanna. They appear to be normal, but upon a closer look, much of the citrus is laying on the ground.

According to Dale Murden, the president of Texas Citrus Mutual, "Estimates right now, on the grapefruit is about 30 percent crop loss on the ground so far. Oranges seem to have come through it a little better. We don't see as much, if any, fruit drop on the ground with oranges. It's a tough thing to judge, counting fruit on the ground versus what you thought you had on the tree this early in the year." 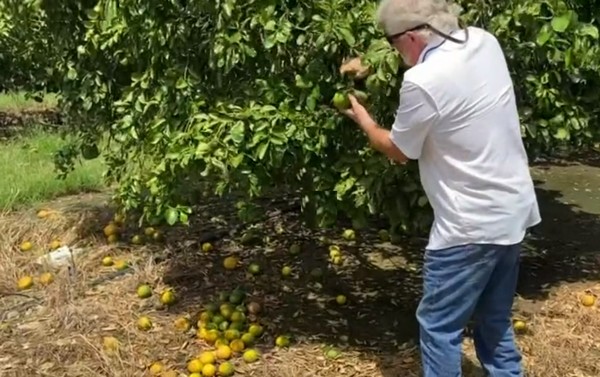 The harvest, that was supposed to bring about a high profit, will now show a huge loss. "Right now, with a 30 percent loss, we're plugging in about a $66 million dollar loss at this point," he adds.

Often citrus that does not grow well can be turned into juice. However, Murden notes, "It's not mature. This is too early in the season to be of any value, but typically once it falls on the ground, within a few days it rots anyway. So I guess the short answer is no. That is a complete loss."

Rfdtv.com reported that even with insurance, growers will be taking a hit.