The United Kingdom's fruit and vegetable imports lagged even further in the first months of the corona crisis. That's compared to the same time last year. In January and February of 2020, the UK still imported as many fresh vegetables as in 2019. But, in March of this year, it was six percent less than in March last year. In April, that dropped to nine percent. And in May it was even less, at 16%.

Value remained the same
However, considering value, British fresh fruit and vegetable imports in all five those months in 2020 were just about the same as in 2019. The total British goods exports in euros were already lower than the previous year, even before the crisis. But, in April and May, goods imports fell by almost a third compared to the same months in 2019. 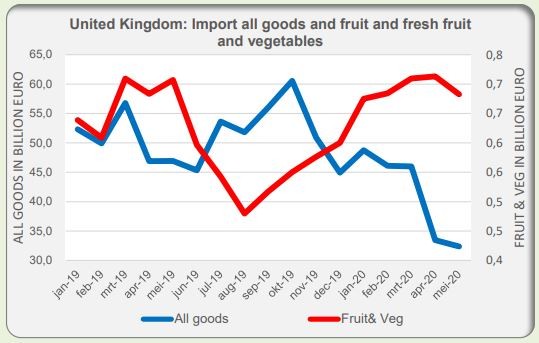 Much less from Costa Rica
Between March and May, British imports of fresh vegetables were ten percent lower than the previous year. Imports from EU countries lagged a little behind other countries. That doesn't count for the two major EU suppliers. Eight percent less was imported from Spain. Nine percent less from the Netherlands. Imports from especially Germany, Ireland, and Poland declined significantly.

The biggest drop in counties was, however, from Costa Rica. Bananas are the most important Costa Rican import product. This product's imports remained on par. But, the UK imported far fewer pineapples from that country. Imports from South Africa and Colombia were slightly higher than last year. These are followed by countries that show another sharp decline - Egypt and Morocco. 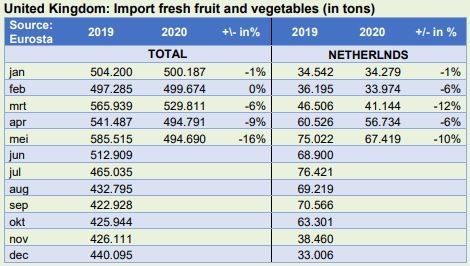 A quarter fewer tomatoes imported
Banana imports weren't terribly disappointing for the March-May period. This important product's imports fell by only five percent. Tomato imports, however, dropped by a quarter. And that of onions by even more than 40%. But here, it must be noted that far more onions than usual were imported at the start of 2019. That was due to the small British harvest of 2018. Apple imports declined by ten percent between March and May. Mandarin imports, however, remained the same.

Mostly fewer Dutch tomatoes, onions, and pears
Britain's fresh fruit and vegetable imports from the Netherlands lagged by eight percent. That was over the first five months of the year, compared to 2019. The import of tomatoes from/via the Netherlands lagged considerably. That was 13% lower than the previous year. Bell pepper and cucumber imports stayed about the same.