The global stone fruit trade has grown steadily over the past decade, but not in recent years. The trade in apricots and cherries in particular grew rapidly. The plum trade grew lightly, but the export of peaches / nectarines has been more or less stable overall for some time. Of course there are fluctuations from year to year because the harvests can vary.

Within the EU, the southern member states Spain, Italy and Greece are the major production and export countries. In Europe, Turkey is also an important export country of stone fruit. Only a small share of the Turkish product goes to EU countries. Chile is also important for the European market. Stone fruit from that ZHR country comes here in the winter six months. For Europe, this mainly concerns plums. The other stone fruit products are of limited import in the winter half year.

Spanish export season extends
The export of stone fruit from the 3 southern EU countries varies from year to year under the influence of weather conditions, but there is little or no growth in the trend. Exceptions are the Spanish, Italian and Greek exports of apricots. Apricots are a small product compared to peaches and nectarines. As a whole, the export of these products in the EU is no longer growing. Unfortunately, the available figures on imports and exports do not show the (large) shift towards the Paraguayos or the “flat” peaches.

What is also striking is the extension of the Spanish export season. In 2019, Spain already exported 52,000 tonnes of nectarines and 41,000 tonnes of peaches in May. In 2012 this was less than half as much with 25,000 and 18,000 tonnes respectively. Spain is also exporting more than before in September and October. 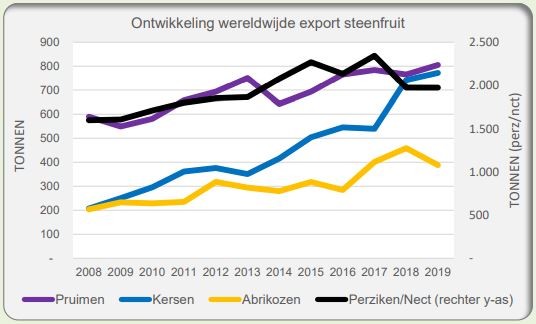 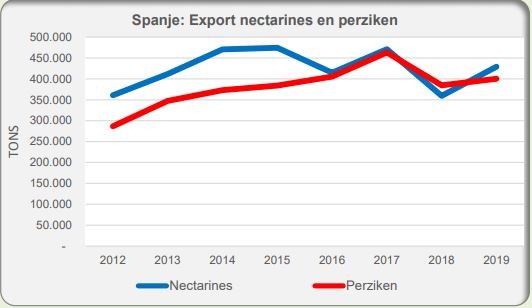 Large amount of plums in second half of year
China is also by far the largest producer of plums. The Balkan countries, the United States, Iran and Turkey also produce a lot of plums.

Belgium imports around 10,000 tonnes of plums annually. This almost exclusively concerns product from EU countries, including (re-export) from the Netherlands. 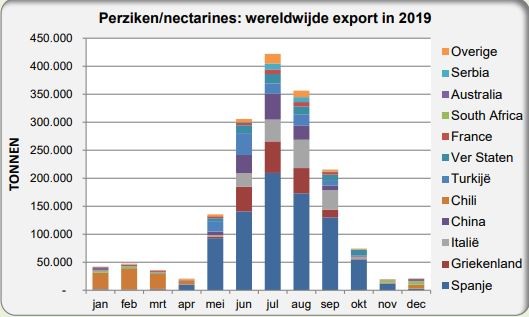 Huge exports of Chilean cherries to China
Turkey is by far the world's largest cherry producer. The other bigger ones are the United States, Uzbekistan, Chile, Iran, Italy, and Spain.
The worldwide export of cherries grew to 770,000 tonnes last year. Chile was the main exporter with 260,000 tonnes. Almost all Chilean exports went to China, more or less all via Hong Kong.

In Belgium, too, 10,000 tonnes more cherries were harvested last year than the previous year. Last year, Belgium exported more cherries (4,500 tonnes) than it imported (4,300 tonnes). In the years before, imports were greater than exports.

Apricots are a modest product in the Netherlands
Turkey is by far the largest producer of apricots worldwide.
The world trade in apricots grew quite fast up to and including 2017, but growth has not continued in the past two years. This is the result of the necessary fluctuations per country. The most important
export countries are Spain (90,000 tonnes), Turkey (70,000 tonnes) and Uzbekistan. Then follow Italy (50,000), Greece and France (both over 20,000 tons).

Germany and Russia are the main import countries for apricots with quantities of 60,000 and 50,000 tonnes respectively. Germany mainly imports from Spain (29,000 tons) and Italy (18,000 tons). Russia mainly gets them from Turkey (20,000 tons) and from the former East Bloc.

The import of apricots in the Netherlands is modest, at 5,500 tonnes in the past year. Most of this is re-exported and most of them come from Spain.

Belgium imports more apricots, namely 7,500 tonnes in the past year.