New Zealand on its way to record kiwi exports in 2020

In 2020's first half, exports to that region increased by seven percent. The EU(27) is New Zealand's second major export region. Exports to the EU grew by eight percent in the first six months of this year. Together, these two regions are good for 80% of the total fresh fruit and vegetable exports from New Zealand.

An increasing amount of gold kiwis; mostly green to Europe
In both previous years, New Zealand exported kiwis to the value of NZ$1,5 billion. In 2019, they took a step back after the 2018 record exports. In the first half of this year, the upward trajectory was found again. More gold kiwis are now exported than green ones. In 2016, the gold-green export ratio was still 36-64. Last year it was 52% gold and 48% green. This trend continued in 2020's first half. Gold kiwi exports increased by 14% in the first six months of the year. One percent fewer green kiwis were exported.

China was 2019's most important gold kiwi buyer. It seems that this year, the most gold kiwis are going to EU countries. Exports to China dropped by one percent. That was from January to June. But it grew by 20% to the EU in the same period. Significantly more gold kiwis were exported to other areas in the first half of the year too. These are Japan, Korea, and the USA. Most of the green kiwis go to Europe. Seen over the whole of 2019, green kiwis made up almost half the total exports. At the beginning of this year, the export of green kiwis to EU countries continued to increase. 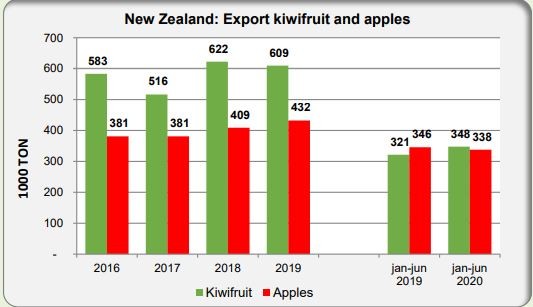 In 2020's first half, fewer apples to China and the UK, more to the EU
In 2019, New Zealand exported a record volume of apples. With 432,000 tons, it was another six percent higher than the previous record year of 2018. However, in the first six months of this year, New Zealand apple exports stagnated. Exports to South and East Asian countries even fell by 13%. A plus (4%) was, however, recorded for exports to the EU27. Exports to North America remained stable. But, exports to the United Kingdom decreased considerably, by 13%.

Gala, and its variants, is the most important variety. Exports of these fell slightly in 2020's first half. Braeburn and Fuji didn't fare well in the first half of the year. Their minuses ran into double digits. Jazz showed growth, but several other varieties had less significant decreases. These are Pink Lady, Pacific Queen, Envy, Granny, and Pacific Rose.

Since April, New Zealand registered the export of some new varieties too. These are the Dazzle (mostly to Vietnam), and the Honeycrisp (mainly to the US). Then there is the Koru (mainly to Russia, the USA, and Japan) and the Rockit (mostly to China, Taiwan, and Vietnam). 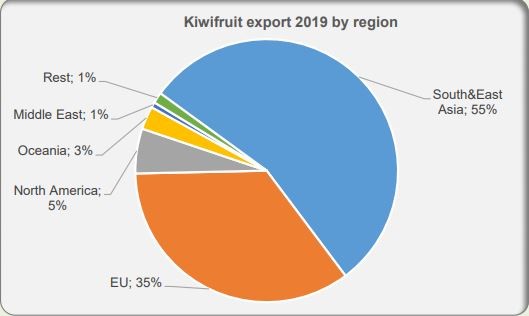 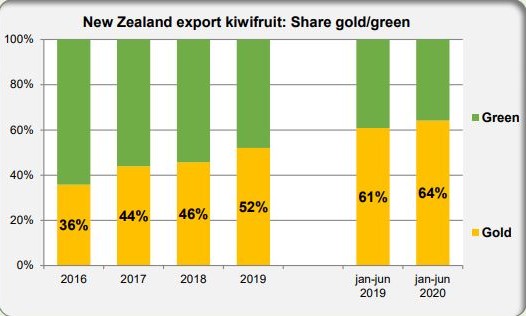 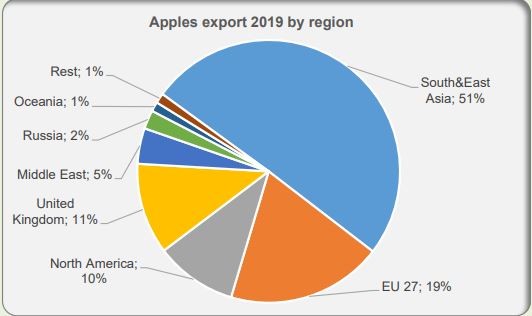