In the first half of 2020, Brazil exported less fruit and vegetables than in the same period of 2019. The Netherlands, the UK, and Spain are that country's most important buyers. Taking 2019 as a whole, they had shares of 37, 17, and 13%, respectively. Together, they're good for two-thirds of the export total.

In 2020's first half, Brazilian exports dropped considerably to both the Netherlands (-18%) and the United Kingdom (-19%). Six percent more was, however, exported to Spain. Significant plusses can be found in the exports to the USA, Argentina, and Uruguay. It must be remembered that far more was sent to the EU and UK in 2019 than before. Seen in that light, this year's exports are similar to those of 2018.

More to Northern and Latin America
By region, exports to the EU27 lagged by 11% in the first half of this year. That's compared to the same period in 2019. The EU27 is good for 50% of Brazilian fresh fruit and vegetable exports. In the first six months of 2020, there was a notable increase in exports to American countries - both to North and Latin America. As stated, this pertains mostly to the United States, Argentina, and Uruguay. 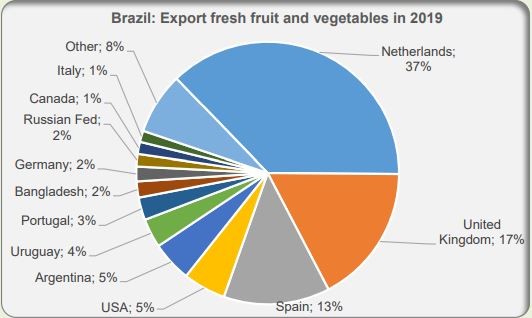 Brazilian bananas and apples went mainly to non-European countries
There was a substantial increase in exports in the first half of the year to Brazil's neighbors, Argentina and Uruguay. That's mainly made up of bananas. A record amount of bananas were already exported in the previous year. Now, in the 2020's first six months, 17% more was again exported.

Brazilian bananas go mainly to Argentina and Uruguay. And in far smaller amounts to Europe. It must be noted that Bangladesh is, by far, Brazil's most important apple buyer. However, in the first half of 2020, ten percent fewer apples were sent to that country. The significant increase in Brazilian apple exports to Russia is striking.

The UK figures are even clearer: mangos -63%, melons -32%, watermelons -25% but lemons +18%. The growth of (direct) exports of Brazilian products to Spain continued this year. It is, however, notable that this trend differs from the Dutch and British image. Lemon exports showed a minus (-8%), but plusses were recorded for mangos (+10%) and melons (+5%).