After several difficult months in which the supply of fresh products made visible the essential role of all the links in the agri-food chain, distribution has returned to normal in a new context of consumption.

The Hnos. Fernandez Lopez group, one of the largest fruit and vegetable wholesale distribution companies in Spain with offices in Barcelona, Madrid, Alicante, Tarragona, Lleida, Tenerife, and Seville, has maintained its activity and experienced first-hand the marketing fluctuations in the last months as a consequence of the health crisis.

The company is highly focused on the national market, where tourism consumption has drastically decreased this season and the fear of a resurgence of coronavirus outbreaks has already become a reality. "The greatest impact has been noted in specific areas, especially in those areas that are reached by plane, such as the Canary Islands or the Balearic Islands. National and international tourists don't want to take a plane at higher prices and a more restricted offer. The new waves of the virus are generating greater uncertainty and the market is a little tense,” stated Christophe Laffon, commercial director of the Hnos. Fernandez Lopez group.

However, the increase in household consumption has offset the loss of this sales segment, Laffon stated. "We have a very large range of products and sales have slowed down. Now, for example, we sell fewer kilos and invoice more than last year. Two months ago we sold more kilos, but the average value of the products as a whole was lower,” the group's commercial director stated. "Sales are slightly lower than last year at this time," he added. “June was like July usually is, and it seems that July is more like an August when it comes to buying. In general, average prices are a bit higher and the higher average price compensates a little for the drop in kilos invoiced.” 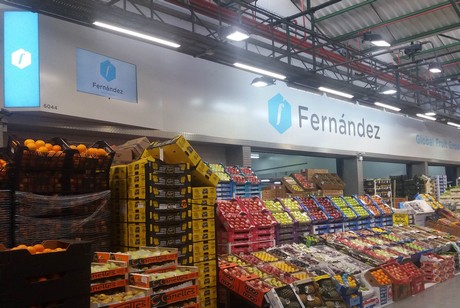 Citrus imports are one of the group's main products in the summer season, which this year offers a favorable scenario. "Last year there was a lot of Spanish and European stock. This year, due to the lower harvest and the increase in consumption caused by the COVID, all markets are lacking citrus," Laffon stated.

Argentina, the largest supplier of lemons to the European market, has suspended shipments this season. "This hasn't been noticed so far because the Argentine had overloaded the market." "I think we'll notice the lack of lemons in August," he added. “We still need to see what South Africa will do to see what will happen to the rest of the citrus. Prices are good in Europe, so they may send more than the continent needs.

Currently, the market is also lacking kiwis, so prices are high and there is a good demand for this fruit. "Supply lags behind sales."

“Grapes are also doing well. Grape sales may be better than last year because they have less competition from stone fruit, which is low in volume and is selling fairly easily. That will help reduce pressure on the autumn fruit as there will be a bigger retail space for it."

“Despite the fear that there may be a large outbreak, like the one in March, the truth is that the entire distribution sector has shown great adaptability to a changing environment. It's part of our DNA. That's why we have been able to face this crisis with a certain amount of ease," he stressed.