According to a recent USDA report, global orange production for 2019/20 is estimated to fall 7.8 million tons (tons) from the previous year to 46.1 million as unfavorable weather leads to smaller crops in Brazil (down 19 percent) and Mexico (down 45 percent).

Brazil’s production is estimated to fall 19 percent to 15.6 million tons due to the alternate bearing phenomenon offyear in the Sao Paulo citrus belt and some weather-related problems  (high temperatures and below-average rainfall after the first two blooms and fruit set).

Fresh orange consumption is lowered to 4.9 million tons while oranges for processing are down 3.5 million tons to 10.7 million. 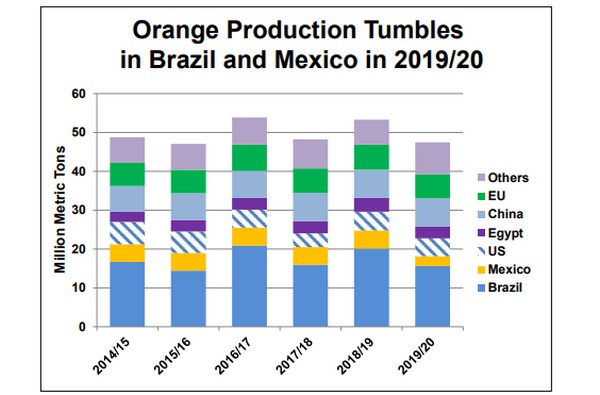 Mexico’s drought and high temperatures are estimated to cut the orange crop almost in half this year as production drops to 2.5 million tons, which would be the lowest harvest since the early 1990s.

The ongoing drought and high temperatures have affected orange production more drastically than other citrus fruits because many orange trees are older and require more water to produce fruit.

Orange exports are anticipated to remain flat with over 95 percent of the exports expected to continue to go to the United States.