The popularity of Spaghetti Squash is growing gradually as consumers become more aware of the product, according to one Western Australian grower.

Morning Glory Farms is one of a small number of producers of the vegetable nationwide, and owner Bevan Eatts says it was his first full season of supply, after expanding from a small trial last year.

"We planted more Spaghetti Squash this season, after supplying a small amount into Coles (supermarket) last year," Mr Eatts said. "This year we expanded production, with the view of growing some for export, but unfortunately we haven't been able to make that happen due to the coronavirus and trade prices. We have, however, been able to sell most of the product domestically to the Sydney and Melbourne markets. It hasn't worked out too bad for our first year of major production."

He added that it is still a very niche market, and he is keen to educate consumers on the benefits of the vegetable, which will ultimately increase demand.

"It's a great vegetable, and can be used as a pasta or noodle replacement," Mr Eatts said. "It has got huge potential, but we have just got to educate everyone. The best way to describe it is that it has a mild flavour. It is a bit like zucchini and is from a zucchini family. It is just a great alternative; it's paleo-friendly and is like a superfood. You can cook a squash fairly easily by cutting it half, coat it in oil, put it in the oven and when you scrape it with a fork, it comes out like spaghetti strands. It can be stored in a container to use another day. The shell can even be used as a lasagne dish. The only thing that limits you is your imagination." 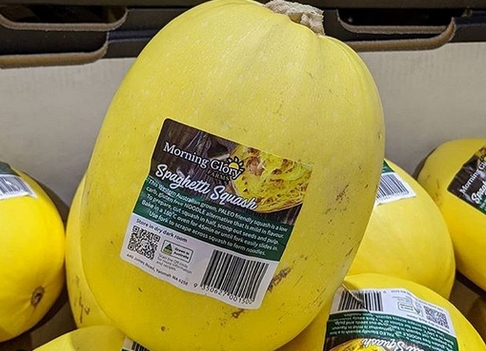 The family-run business is now in its fourth generation, with Bevan's son involved in running the 700-acre property. It has diverse operations spanning beef cattle, sheep, lamb, as well as fruit and vegetables; cauliflower, broccoli, gourmet pumpkins and sweet corn.

"We have definitely got a few irons in the fire, and life is never a dull moment," Mr Eatts said.

The farm is located 18 kilometres West of Manjimup in the Southern Forests Region of the state. Mr Eatts says while the growing season provided no major challenges for the Spaghetti Squash, the lessons learnt will be valuable going forward.

"We had a hot start to summer, which finished off quite mild," he said. "In hindsight, I probably planted the crop a bit late in the season, but it was all about learning this year about when the ideal time is to start harvesting and picking. We learnt a lot. There is probably only 2-3 growers in Australia that grew the volumes that we did this year, so we are hopefully going to be able to market and promote it over the next few years and increase demand."

Mr Eatts says the Spaghetti Squash is a winter vegetable, and one way of trying to capitalise on consumer engagement is through the use of blockchain systems.

"We start with a basic label, with a basic recipe on it," he explained. "We expanded that with QR Codes under the DiMuto Block Chain system. When a consumer scans that they are taken to a landing page, with a cooking school and some recipes. It also has some of the health benefits, so we have tried to engage with the end consumer as much as we can, by putting labels on every single squash that we sell. We also had some details about the farm and the growers to improve that connection between farmer and consumer."