Low demand and prices in the last 2-3 weeks 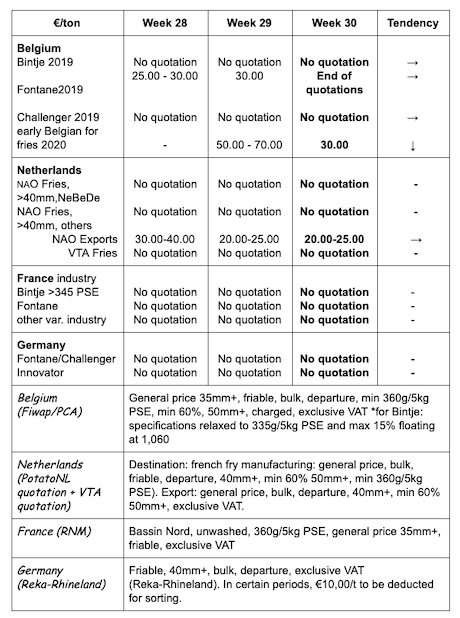 Processed potatoes: some factors are still working with old potatoes, almost exclusively under contracts. Rare transactions at 3.00 €/q for old potatoes. There are very few transactions (lack of demand) for the new potatoes, but prices have dropped again to 3.00 €/q.

The quality of the early potatoes (Amora, Anosta, Première…) are good to very good (despite a lack of caliber/length for some batches or varieties) with average to good yields (25 to 35 t/ha), excellent weight under water (sometimes even too high), and proportions of 50 mm+ above 70% (for Amora) and often a lot higher in Rhineland. 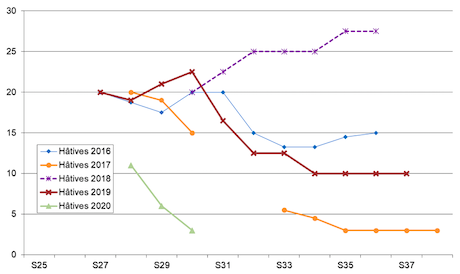 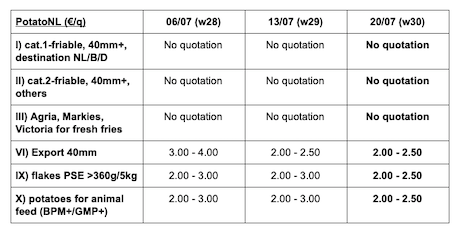 Factories are still working with contracts for old potatoes (and will continue to do so for 1 to several weeks). The free volumes go to livestock or flakes. The industrial activity recovered better than initially expected, but prices have not increased. They even dropped in the last 2-3 weeks. Transactions were between 2.00 and 2.50 €/q last week.

Fresh market for early native potatoes: low tuberization is confirmed, also in the “Anschluβsorten” (half-early, between early potatoes and conservation varieties). Pressing calls are made to topkill in time to avoid excessive calibers that do not sell easily! The price decrease for early potatoes on the fresh market seems to have stabilized. No quotation yet for the early potatoes for processing (we do know that prices are low). The factories are still working with the old potatoes or are closed/in maintenance. A few sales are made to peelers...