"When I talked about growing tomatoes in the desert, people thought I was crazy"

"When I started telling people that I was going to grow tomatoes in the desert, everyone thought I was going crazy," Sky Kurtz, founder of Pure Harvest Smart Farms, recalls in an interview with DW.com. The United Arab Emirates is not exactly what is commonly understood as  an ideal location for agricultural production. There are 12 rainy days per year on average. Less than one percent of the Persian Gulf country, which consists of seven emirates, is suitable for agricultural production. It is therefore not surprising that the desert state imports 80 percent of its food from abroad. 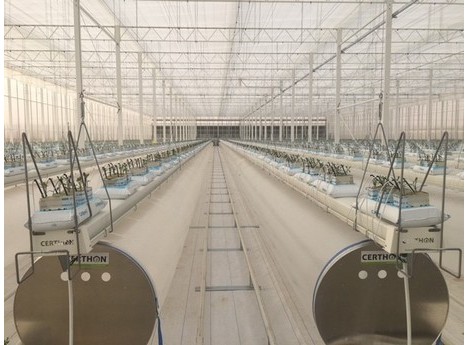 The greenhouse complex at the start of the project in the summer of 2018. The ambitious cultivation project was realised in close cooperation with BayWa / Photo: HortiDaily

Kurtz is just one of many entrepreneurs who came here in recent years, bringing a lot of high-tech to the agricultural sector and triggering a boom in regional food production in the United Emirates. In 2017, his company Pure Harvest, which promotes the environmental friendliness of its food with the slogan "Cleaner-than-organic", built the first fully air-conditioned greenhouse in Abu Dhabi.

In view of the extreme drought and the desire to ensure a crisis-proof food supply for the population, the country on the Arabian Peninsula is investing millions in new technologies, such as vertical farming. The United Arab Emirates might even become agricultural pioneers.