Spanish fruit and vegetable exports plummeted in May

Spanish fresh fruit and vegetable exports dropped by three percent from January to May, compared to the same period last year. According to Eurostat figures, however, it was higher than in previous years. What's striking is that exports in 2020's first four months didn't differ much from the same months in 2019. But, in May, there were 16% fewer fresh fruits and vegetables exported than in May 2019. Spanish exports lagged this year, even compared to the same months in 2018 and 2017. 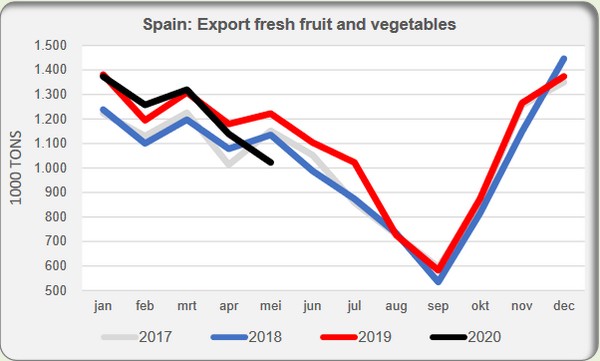 In January and February, as many goods were exported from that country as in 2019. But, in March, that decreased by 14%. And in April and May, it was much lower, at 41% and 35% less, respectively. On the whole, total Spanish exports decreased in value by €10 billion in those two months. But, fresh fruit and vegetables had a share of ten percent of the total exports in April and May. That was only five percent in 2019.

Far less exporter to the Netherlands than to Germany, France, and the UK
There are reasonably significant discrepancies between buyers. From January to May, exports to some important buyers remained about on par with the previous year. These are Germany, France, and the United Kingdom. Exports to the Netherlands decreased in those months by seven percent compared to 2019. Italy took roughly the same amount. Exports to Poland, Portugal, The Czech Republic, and Denmark lagged significantly. 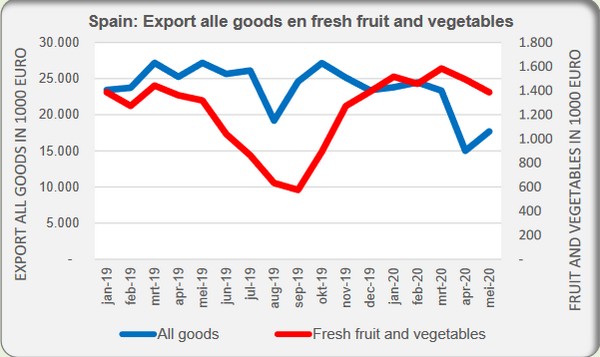 A quarter less to the Netherlands in May
The sharp decline in Spanish exports in May 2020 wasn't so substantial when it came to Germany (-6%). It was more considerable, at 14%, for France. Exports to the UK fell by ten percent in May. And as much as a quarter less than in May 2019 was sent to the Netherlands. That counts for Italy too. Spanish exports to Poland even lagged by almost 40%.

Just about as many oranges and bell peppers, but far fewer mandarins and tomatoes
When it comes to products, orange exports fared well. These decreased by only two percent. Mandarin exports lagged by no less than 17% between January and May. Bell pepper exports also remained on par, but tomatoes lagged by 11%. May was a bad month for all the important products. Spain exported one-third fewer oranges than in May 2019.

And mandarin exports lagged by a whopping 70%. But, then, the mandarin export season's usually nearing its end in May. In May of this year, some product exports were down a quarter on the same month in 2019. These are for tomato, bell pepper, cucumber, and lettuce. Strawberries (-2%) and courgettes(+7%) fared well.