Fewer apples are expected to be harvested in the Netherlands this year compared to last year, while the total pear harvest is comparable to that in 2019. The Dutch harvest estimate is 234 million kilos of apples and 373 million kilos of pears. This is evident from information from GroentenFruit Huis and NFO on the basis of the harvest estimation work group.

In the period from 8 to 21 July, measurements were taken in orchards representative of the Netherlands. Due to good weather conditions, there has been a regular growing season. Growers expect a good quality harvest. The total apple harvest is estimated to be 14 percent lower than in 2019, mainly due to fewer fruits on the trees. The pear harvest is estimated to be as high as last year.
The new harvest of apples and pears will be available from mid-August and consumers will once again be able to enjoy the tasty new harvest.

Apples are grown on 6,200 hectares this year, as figures from CBS show. This is three percent lower than last year and the downward trend continues. With a share of 40 percent in the Netherlands, Elstar is by far the most cultivated apple. This year, 90 million kilos of Elstar are expected to be harvested, compared to 109 million kilos last year. The second variety is Jonagold (incl. Jonagored), which assumes 52 million kilos (67 million kg in 2019).

Pear cultivation takes place in the Netherlands on 10,100 hectares. This makes the surface comparable to last year. Conference's crop, which accounts for three-quarters of the Dutch pear harvest, is estimated at 281 million kilos. At a distance, Doyenné du Comice and Beurré Alexander Lucas are the most commonly grown pear varieties, based on 27 million kilos and 26 million kilos.

Harvest estimate apples and pears in the Netherlands 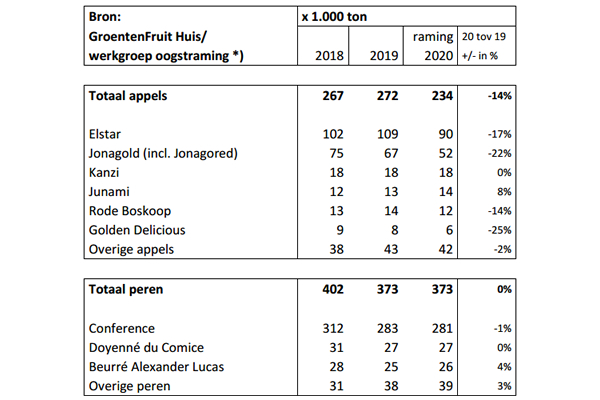 *) represented in the harvest estimation work group are:
- the Dutch Fruit Growers Organization (NFO)
- GroentenFruit Huis
- Central Bureau of Statistics (CBS)
The work group is advised by Delphy, who performs measurements at companies across the country.