Top 10 export markets for US fresh fruits and vegetables

In 2019, the value of US fresh fruit and vegetable exports to the world reached $7.1 billion, a three percent decline from the prior year. Canada remained the top US market, accounting for 49 percent of exports, or $3.5 billion. Mexico came in as a distant second with 11 percent of US exports while no other markets had more than 6 percent share of exports.

US orange exports experienced the greatest drop, down $100 million from 2018 and accounting for 34 percent of the overall decline, with the largest losses in South Korea, Canada, and China. US orange production is still recovering from the poor harvest of 2018/19 and declining production due to citrus greening. 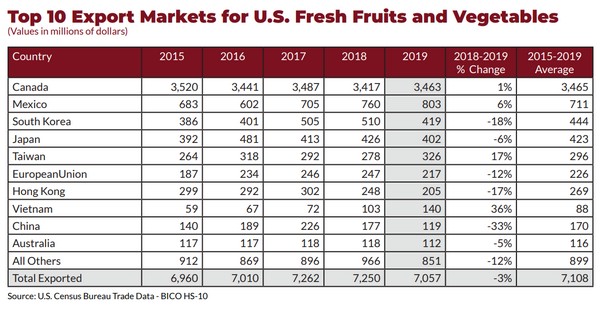 While tree nut exports to Hong Kong, Japan, and Mexico declined by 34 percent, 4 percent, and 7 percent, respectively in 2019, this was more than offset by increases in sales to the EU, India, and China.