In the shadow of COVID-19, remote monitoring of the cold chain will be more valuable than ever for Queensland’s north Burnett citrus growers.

While Queensland citrus seafreight shipments to protocol markets in Asia require an in-transit cold disinfestation phytosanitary treatment, it is also important to ensure that container temperatures do not drift too low and compromise fruit quality. Reefers destined for protocol markets typically include a hard-wired fruit pulp temperature monitoring system. However, as acknowledged by Allen Jenkin from Ironbark Citrus, “unless there is a breach of protocol, it can be difficult and costly to obtain the data to identify the cause of quality loss in the event of a claim.”

A range of relatively lower cost wireless temperature and location monitoring loggers that report data in real-time via the mobile network have emerged in the past 4-5 years.

As part of an Innovation Connections project, six Queensland citrus exporters trialled real-time loggers during the 2019 season to identify if the export cold chain was performing well or required improvement. In total, 53 shipments were monitored using loggers that recorded air and/or pulp temperature. Loggers were inserted into a carton of Murcott mandarins at the rear pallet row of containers. Additional loggers were placed at the front of the container in some shipments.

According to Craig Meyer from 888Citrus, “I was impressed by how the loggers provided regular temperature data during shipment when they were within mobile signal range. Although we couldn’t receive updates when the shipment was out at sea, all the data was available on arrival at the importer”. 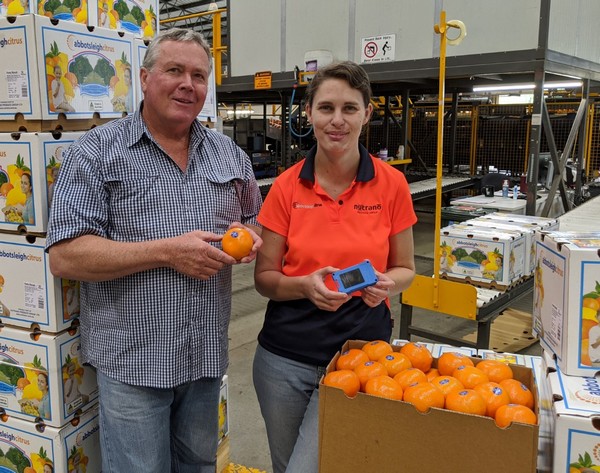 Andy Mead (left) from the Department of Agriculture and Fisheries and Joanne Rieck from the Nutrano Produce Group with a real-time data logger.

By using the real-time loggers, the citrus exporters identified that the average pulp temperature varied from 0.7°C to 1.4°C around a set point of 1.0°C and occasionally dipped as low as 0.2°C. Extended exposure to such low temperatures could induce chilling injury in cold-sensitive mandarin varieties and lemons. The monitoring also demonstrated that pulp temperature were on average 0.6°C warmer at the rear than at the front of the container.

Pulp temperatures were generally more uniform than air temperatures throughout the journey but within the margin of error for the loggers (+/- 0.5°C). This was expected under seafreight conditions where there is relatively low airflow and the air and fruit temperatures are similar.

The technology was able to identify delays in departures from the Port of Brisbane or Melbourne and/or stationary periods associated with transhipping in Singapore or Malaysia. For Ainsley Emmerton from Quebec Citrus, “this type of information is valuable in identifying causes of delays to reduce the risk of fruit damage from excessive in-transit storage times in future shipments, as well as preventing logistical and commercial challenges associated with fruit arriving at markets much later than initially planned”.

As for Allen Jenkin, he sees an opportunity for the remote monitoring technology to identify the most efficient container temperature set point. “With this data, we can now request a set point that is closer to the protocol limit that ensures the consignment still meets the requirement, but with minimal risk of chilling damage to the fruit” said Allen.