As the pandemic hold on the country continues, fresh produce sales remain highly elevated compared to 2019. However, in what looks to be a slow march back to normal, gains have been eroding by one to three percentage points each week ever since the week ending April 26. Fresh produce sales gains in June continued to sit in the mid teens versus the 2019 baseline due to the many more at-home meal occasions. Throughout the pandemic, vegetable growth has outpaced gains in fruit sales —often by more than 10 percentage points.

Organic produce sales gains followed a very similar pattern to those of total produce throughout the pandemic. During the first four-week period ending March 22, total produce sales increased 18.0% versus the same period in 2019 versus +21.5% for organic produce sales. The third period, the four weeks ending May 17, were strong due to a big Mother’s Day performance. The most recent four-week period ending mid June saw gains more similar to the April performance. The difference in growth rates between organic and total of about 1.5 percentage points is fairly steady across periods. The net effect for the pandemic period from March 2 through June 14 is a +16.2% increase in dollar sales for total produce and a +16.4% increase for organic produce.

In fruit, organic sales initially far exceeded those of total fruit, but the gap disappeared over time with equal gains of +13.1% during the May sales period. In the June time period, total sales gains actually exceed those of organic fruit, at +9.1% versus +6.7%, respectively. In vegetables, organic fell behind total vegetable growth from the start and has trailed behind throughout the pandemic.

As organic sales make up less than 10% of total produce sales, the percentage increases for organic fruit and vegetables are somewhat higher. While the percentages tell one story, absolute dollar gains tell another. Year-to-date through June 14, the produce department has sold an additional $3.0 billion in fresh produce versus the same period in 2019. Organic produce has sold an additional $269.3 million during this same time period.

Organic produce volume gains and share
Given its higher price per pound, organic produce makes up a smaller percentage of total produce volume than its dollar share. In volume, organic represents between 5% and 6% of pounds. Throughout the pandemic, organic has tracked ahead of the total in pound growth percentages. However, this is completely driven by fruit where gains are roughly double for organic versus the total in the March, April and June time periods. The gap was much smaller in the May time period. For vegetables, organic produce gains trailed conventional in each.

While percentage gains for organic volume paced ahead of the total, the difference was not enough to maintain share. During the first four-week block, share stood at 5.8%, but this dropped to 4.7% during the June period. Year-to-date through June 14, total produce sold an additional 2.2 billion pounds of fruits and vegetables versus the same period in 2019. In contrast, organic sold an additional 139.6 million pounds during this same timeframe.

Top organic sellers during the pandemic
Berries were easily the top organic fruit seller during the pandemic, generating $85 million in sales during the four weeks ending June 14 versus the same period year ago. However, they also had the highest volume/dollar gap with an increase of +11.9% in dollars and 32.5% in pounds. Apples and bananas close out the top three. 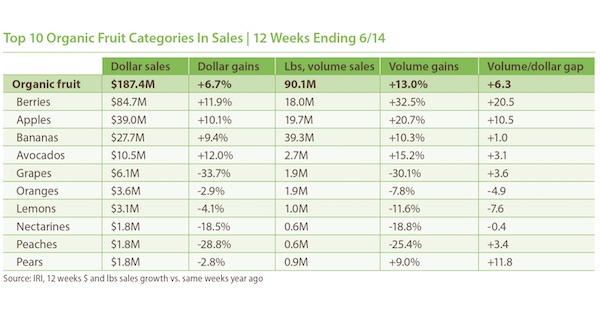