'The cherry range mainly consisted of local and Turkish deliveries'.

The cherry assortment in Germany  was mainly composed of local and Turkish deliveries. Inflows from Greece, Belgium and the Netherlands supplemented the assortment. Slovenian and Polish goods only appeared sporadically. The Spanish and Italian season was already coming to an end. The quality of the goods diverged: On the one hand, there were burst and rain-damaged goods, but on the other hand, there were some excellent products as well. For the prices this meant that the upper and lower limits of were quite far apart.

Demand was generally good. Larger fruits could be handled relatively quickly, smaller ones remained rather slow-moving. In Berlin, Turkish Napoleon only cost €3 per kg, although they were of high quality. 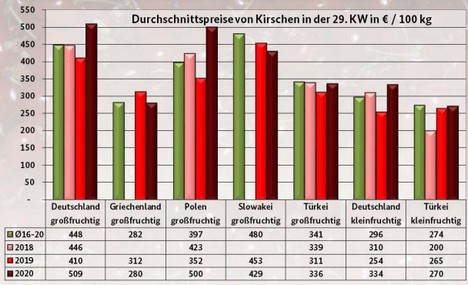 Apples
The sales period for alternative batches was getting to a close and there were few domestic products left to be found. However, the new campaign was already starting on a small scale. Still, the demand was mainly met with supplies from overseas.

Pears
The demand was not particularly strong and could therefore be satisfied without any problems. As a rule, prices remained constant. The European season started with smaller shipments from Italy, Spain and France.

Table grapes
The sale went relatively smoothly. Prices hardly changed at all. Only batches of limited quality had to be sold with discounts. The last Egyptian imports were considerably cheaper than European lots.

Strawberries
Germany apparently dominated events here. Bad weather led to a limited quality and demand on the one hand, while availability declined on the other. As a result, prices moved both downwards and upwards.

Apricots
Aromatic domestic batches cost up to €5 per kg. Native Kyoto were hardly for sale at this price. Turkish sugar apricots were quite popular and usually cleared immediately. Hungarian cegledi generated little attention because of their high prices.

Peaches and nectarines
Spanish and Italian deliveries dominated, Greek and French supplemented the offer. First Turkish imports were not convincing in terms of taste. The marketing was inconsistent. Prices mostly trended to go downwards.

Lemons
South African, Spanish and Argentinean lots divided the business among themselves. The demand could be covered without any difficulties. This led to constant prices.

Bananas
In many cases, the distributors had sufficiently adjusted the supply to the unexcited interest and were thus able to keep their demands stable. Sometimes, however, access was so reduced that concessions had to be granted.

Cauliflower
The availability of domestic lots was not abundant. In certain areas, demand could only be covered by a small margin. In some cases, prices rose as a result, despite the rather limited accommodation facilities.

Lettuce
In general, German goods predominated. The demand was not particularly strong. COVID 19 apparently continued to impair the sales: gastronomers, canteens and caterers were still the clients that were missing.

Cucumbers
The supply was limited. This was accompanied by price increases, which often affected all origins. While the rising prices had no effect on sales, customers were noticeably less inclined to buy.

Tomatoes
The assortment consisted mainly of Dutch and Belgian deliveries. Italy was added for cherry tomatoes and Germany for panicle bids. The prices mostly tended upwards.

Sweet peppers
Dutch goods were predominant, with Belgian inflows adding to this. Turkey was the main source of green products, Spain red and yellow. In general, prices rose compared to the previous week. Sales stagnated in part as a result.