Overview of the German cherry sector

According to a recent USDA report, Germany is the third-largest importer of cherries in the world after China/Hong Kong and Russia. From 2010 to 2019, between 52 and 77 percent of the cherries consumed in Germany were imported, with the majority of imports originating in other EU member states. The largest non-EU cherry suppliers are Turkey for sweet cherries and Serbia for tart cherries.

Total German cherry production for marketing year (MY ) 2020 is estimated at 53,490 MT. While this represents a decrease of 11 percent compared to MY 2019, it is still 12 percent above the historical (2010-2019) ten-year average. Opportunities for U.S. sweet cherries are best in August/September, after the German domestic growing season. 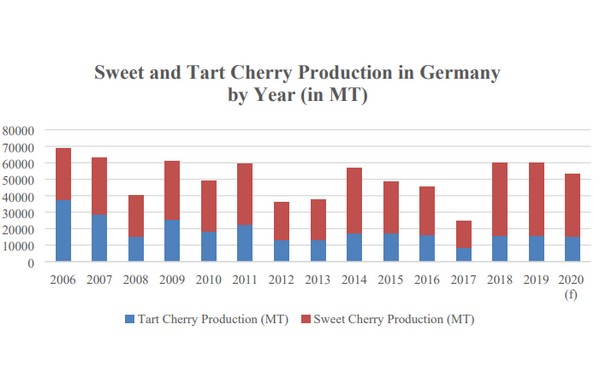 While the total cherry area is estimated slightly lower (minus 1 percent) than in 2019 remains stable at 7,866 ha, the trend to sweet cherries and away from tart cherries continues. The harvested area for sweet and tart cherries is expected to amount to 6,022 and 1,844 ha, respectively, compared to 6,054 and 1,886 ha in 2019. Compared to 10 years ago, sweet cherry area increased by 12 percent, while tart cherry area declined by 37 percent. The latter is a result of strong competition from other EU member states.

According to German industry sources, other member states such as Hungary and Poland have lower production costs and are more competitive than German producers. Germany is more competitive for sweet cherries, since most of the production is for fresh consumption and consumers are willing to pay a premium for locally produced cherries.