15 years with the Munich company:

"In our fast-moving society, not many people will stay at the same company for longer periods of time. When employees remain loyal to the same company for more than 15 years, this shows mutual trust, solidarity and commitment. We are very grateful for the loyalty of our employee Alessandro Langella and are proud to feel that we continue to be a good employer", says a delighted Günther Warchola, managing partner of one of the oldest and leading family-run companies in the fruit trading sector at the Munich Grossmarkthalle. Mündlein is honouring Alessandro Langella for his many years of service to the company at the 2020 works meeting in Munich. 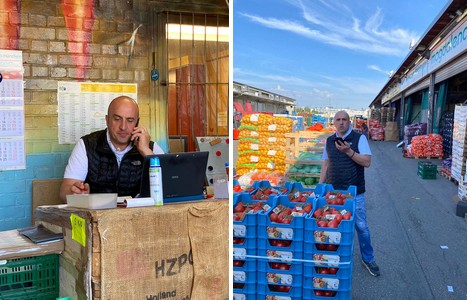 Since March 2018, Alessandro Langella has been managing director of the traditional Magdalena Mündlein company.

Alessandro Langella, who already had commercial genes in his family, joined Magdalena Mündlein on 18 July 2005 and quickly established new contacts alongside the existing supplier contacts - not least thanks to his native Italian and helped by his warm and always obliging manner. Thanks to the new supplier contacts, Mündlein was able to expand the range of goods considerably and increase sales by 60% in the period since 2005. In April 2014, Langella initially became an authorised signatory, and since March 2018 he has been managing director of the traditional company at the Munich wholesale market.

"We value Mr. Langella as an important employee and colleague, who has become an integral part of our company through his many years of service, his professional experience and specific industry knowledge. In this spirit, we are looking forward to the next 15 years with Mr. Langella and hope for continued good cooperation," says Günther Warchola.