Norway imported less fresh fruit and vegetables in the first half of this year. These figures were down six percent on the same period in 2019. Compared to the first half of 2018, it was three percent lower. Imports lagged in, especially, April and May. In January, February, and March, the deficit was smaller. In contrast, in June, Norway imported considerably more than in previous years.

Of the major suppliers, Spain did well. Spanish product imports remained at the same level as last year. As did those of Italian products. More (bananas) were even imported from Ecuador than in previous years. There were other countries that Norway imported more from in the first half of 2020. These are Peru, Brazil, Turkey, and Morocco. 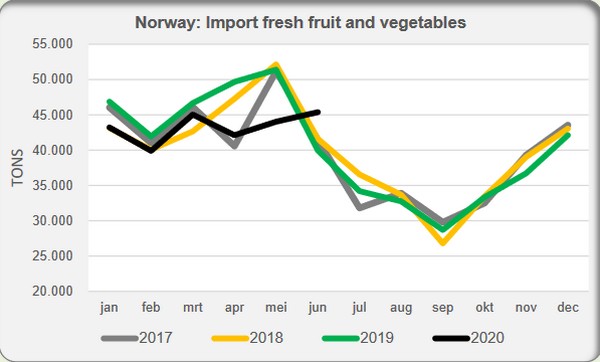 Less from Costa Rica and the Netherlands

There was, however, far less fruit and vegetable imported from two major suppliers - Costa Rica and the Netherlands - than last year. Norway imported mostly bananas from Costa Rica. And in fewer quantities, pineapples. Norway imported less from other countries in 2020's first half too. These are Poland, Israel, Chile, Belgium, and New Zealand.

Bananas are an important Norwegian import product. This remained at practically the same level in the first half of the year as in previous years. The country's number two import product is apples. Of these, more than ten percent less were brought in in the 2020's first six months. Orange import levels, however, stayed at the same level. The steady growth of watermelons, mainly from Spain, is striking. Slightly fewer tomatoes, grapes, bell peppers, cauliflower, and broccoli were imported. 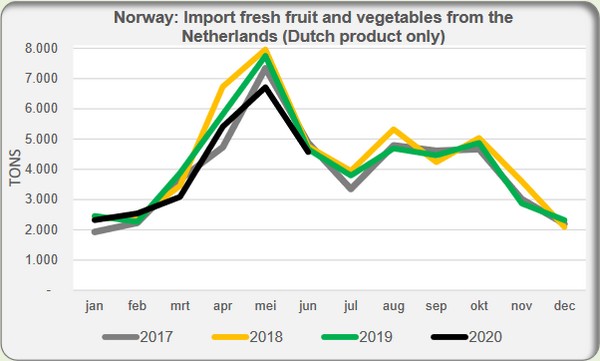 In the 2020's first half, Norway imported 24,650 tons of Dutch-grown fresh fruit and vegetables. That's about ten percent less than in the same period in 2018 and 2019. The decrease was mainly because far fewer Dutch pears, strawberries, and onions were imported. Bell pepper imports stayed on par. And Norway bought in more Dutch tomatoes. There were smaller Dutch products that saw an increase. These are beets, carrots, aubergines, cauliflower, and broccoli. Cucumber and cabbage are also less important Dutch products. They didn't do well in the 2020's first six months.

Far more products re-exported than exported from the Netherlands

Half of the fresh vegetables were locally-grown

Norway depends heavily on imports for its fresh fruit. In 2019, not even ten percent of all fresh fruit was locally-grown. That includes production and imports. For apples, this figure concerns a quarter of their volume. For strawberries, it's as much as 50%. But, for pears, it's only three percent. Of all the - produced and imported - fresh vegetables, just more than half are Norwegian products. This level's determined primarily by carrots, onions, and cucumbers. Of these, 90, 55, and 65% are locally grown. For tomatoes, cauliflower, and broccoli, that's a third.