The multiple frontal system over the Cape has resulted in an increase of 7.4% across all of the Western Cape's dams; the important Theewaterskloof Dam stands at 72.3%.

The storms were accompanied by gale winds which in the Southern Cape were reportedly as loud as a freight train. There are reports of roofs blown off along the Southern Cape and in the Karoo as well as damage to horticultural netting around George. 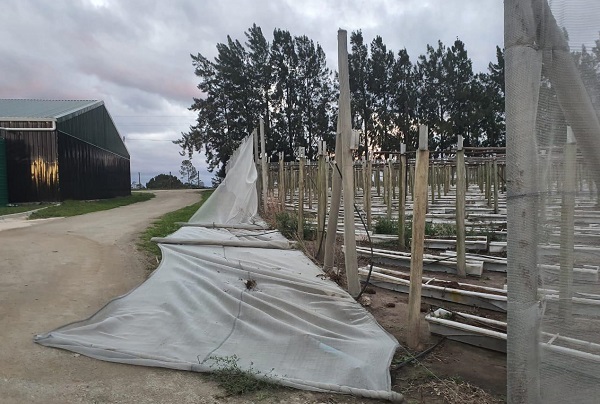 Klein-Karoo drought continues
Unfortunately recent strong rain - Kirstenbosch Botanical garden measured 125mm over one night late last week - has not made much of a difference in the Klein-Karoo, a stonefruit production area, and in the Central Karoo.

Widespread snowfall is welcomed, it's the Western Cape's "summer water", while the cold is a boost to colour development to citrus still on the trees.

Around Citrusdal about 100mm of rain fell over the past ten days, while the apple production area of Grabouw received close to 150mm.

Fruit producers with long term crops excluded from drought relief
Agri Western Cape, agricultural lobby group, has called the revocation of the drought as a national disaster (gazetted on 16 July), an indication of government's lack of empathy with the agricultural sector.

Around R25 million had been disbursed to the Western Cape government in the form of drought relief until this revocation.

“Agri Western Cape understands the need caused by Covid-19, but the need caused by the drought can’t be overlooked. The ability of many producers to survive has been under pressure for years, and we are now looking at the inevitable reality that producers no longer have the financial endurance to cope with the drought. Their position was worsened by unforeseen expenses to comply with Covid-19 regulations. All of this impacts on employment on farms and on the economy of the rural areas,” says Agri Western Cape's CEO, Jannie Strydom.

He points out fruit and grape producers of long-term crops, as well as game and ostrich producers, are already excluded from government drought assistance, while they need it critically, especially in the Klein-Karoo. Producers with long-term crops are disqualified from drought aid.