After the cases on the tomato, the virus hits another vegetable

First report of the ToBRFV on the bell pepper

In January 2020, about 85% of a bell pepper cultivation in a greenhouse located in the province of Ragusa showed symptoms similar to those of a virus. These consisted of a slight mosaic, a yellowing of the young leaves and a brightening of their veins, the browning of the stem with strong necrosis at the intersection of the secondary branches and a partial necrosis of the vegetative apex, along with streaks, mosaic spots and deformation of the fruits.

"It is important to stress that in 2019 the tomato was grown in the same greenhouse, which was ravaged by a vast infection caused by the ToBRFV (Tomato brown rugose fruit virus), a new threat to the tomato" state the pathologists of the University of Palermo who, in collaboration with IPSP-CNR of Turin and Bayer Crop Science Italia, collected 30 bell pepper plants (15 sick and 15 asymptomatic) from the affected greenhouse in order to study the cause of the infection. 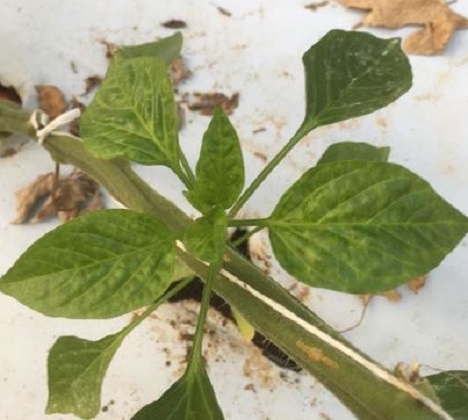 The samples were analyzed for the presence of the Cucumber mosaic virus (CMV), of the Tomato spotted wilt virus (TSWV) and of the new ToBRFV virus (Tomato brown rugose fruit virus), whose first outbreak in Sicily was reported at the end of 2018.

"Genetic sequencing and real-time PCR have confirmed that the symptoms detected on bell pepper plants are caused by the ToBRFV - say the researchers - The cultivation of tomatoes and bell peppers represent about 70% of the market for fresh fruit and vegetables in Sicily. Eradication measures are therefore underway in this region in order to try to contain the spread of ToBRFV. As far as we know, this is the first report of ToBRFV on bell peppers in Italy and in Europe".