The Mushroom Guys and their urban mushroom farm

Kardinya is a suburb of Perth, Western Australia. There is an urban mushroom farm hidden in the lush surrounds of Kardinya’s industrial estate. Its owners are Adrian Acquado and Derek Novak.

Although Acquado and Novak prefer to keep a low profile, their handiwork is front and centre at key West Australian restaurants including Lulu La Delizia, Young George, Fleur, Mummucc and Bib & Tucker, among others.

Considering the Mushroom Guys started trading in December 2018, this market cut through is impressive. Part of their success – at least if dish shots on Instagram are anything to go by – is offering customers something different. The other part of the equation: freshness. Mushrooms are harvested and delivered on the same day, sometimes even on the same day they’re ordered. 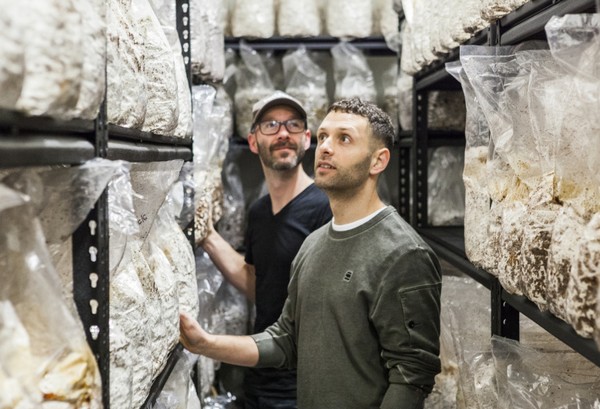 The farm itself is a series of temperature- and pressure-controlled rooms. Each five-kilo block of mushrooms begins life as a substrate: a combination of local jarrah sawdust and soybean hulls that are mixed twice a week in-house. This growing medium is then packed in plastic bags, sterilised in what’s best described as a substrate sauna, left to cool, then taken to a sterilised lab where they’re inoculated with mushroom spores and sealed.

Of the 11 varieties grown by the Mushroom Guys, pink and yellow oysters are the fastest growing, ready in as little as a month. At the other end of the spectrum, shiitakes and chestnuts can take up to four months from start to finish – and this extended production time is reflected in their price.