US growers experience a nut glut

The past decade’s demand boom exhorted US growers to bring on the supply. They planted loads of new trees in the past several years. Groves take time to mature enough to bear fruit. Now, all that crop expansion is finally coming to market. However, it’s arriving just as Chinese tariffs and fallout from the pandemic are dragging down exports.

According to data from the US Department of Agriculture, this year's American almond crop is forecast to climb 20% to a record 3 billion pounds. California is the primary commercial producer and accounts for about 80% of the global harvest. Increased acreage, advanced technology and ideal weather conditions have propelled supply higher, according to Richard Waycott, president and chief executive officer of Almond Board of California.

Judy Hirigoyen, the vice president of global marketing at American Pistachio Growers, sees production near an all-time high of 1 billion pounds. Prices for US pistachio growers could drop to about $2.30 to $2.40 a pound this season from $2.60 in 2019, according to David Magana, senior horticultural analyst for Rabobank. 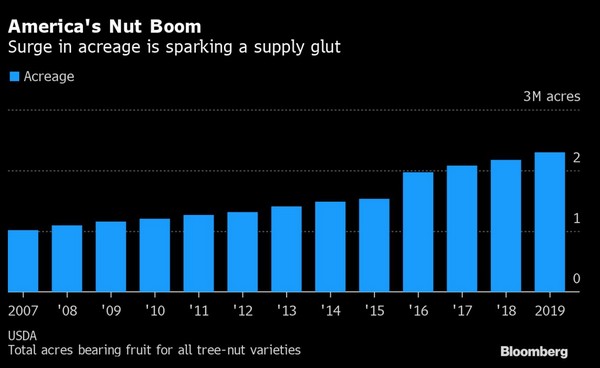 Meanwhile, president Trump's trade war with China is unfortunately eroding demand. The Asian country is typically one of the primary destinations for American exports. But in recent years, China has tried to move toward self-sufficiency by growing more of its own crops. So export demand was already starting to wane, but things escalated amid the trade spat. Beijing slapped tariffs as high as 75% on US shipments.