Peruvian agro-exports resumed their normal cycle in May

Peruvian agricultural exports are strongly seasonal, as the most important products are exported fresh and shipped out soon after being harvested.

The bulk of exports are carried out between June and January of the following year. However, the highest export values are reached around the month of December. Prices start to decrease in the following months of the new year and reach their lowest level around March of each year. 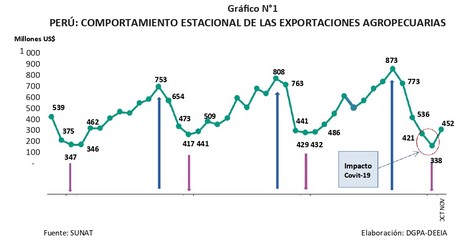 In the coming months, exports are expected to be favored by a stable climate with sufficient water availability, especially on the coast and in the jungle, which will encourage further export growth. The effects of this pandemic are not expected to end in the short term and they will continue to hinder the performance of agricultural exports.

Main export products
The main exported products, which explain the behavior of agricultural exports, can be divided into two groups:

The first group is made up of those products that, due to the seasonality of their production, have been increasing exports and whose export volume and value are expected to grow in the following months. The important performance of fresh avocados stands out among these products. 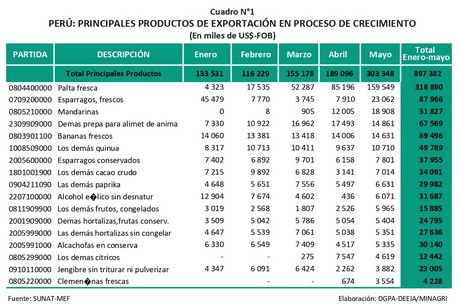 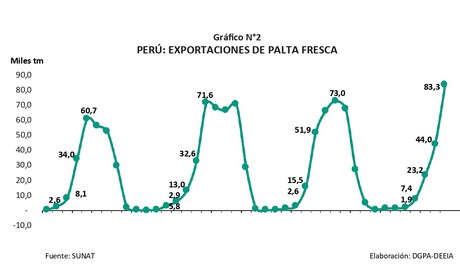 The other group is made of products whose export campaign was ending between December and January, and therefore their exports were gradually declining, such as grapes, mangoes, blueberries, garlic or onions, as well as those products that have suffered the impact of the measures taken to face the pandemic. To date, grapes have become the most important agro-export product. 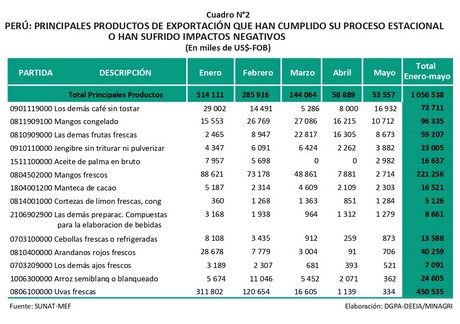 Main destination countries
Nearly 20 markets accounted for approximately 88% or 2.227 billion dollars of Peru's agricultural exports between January and May of 2020. The most outstanding markets were: the United States (29.5% participation), the Netherlands (18.2%), Spain (7%), the United Kingdom (3.3%), and Chile (3.1%); Other countries in the South American area that also stand out were Ecuador, Colombia, Bolivia, Chile, and Mexico. 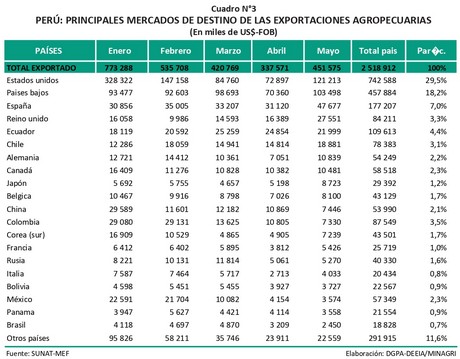