At the moment, volumes are low and there's a high demand in the cherry market. The supply has been reduced mostly around the Mediterranean due to unfavorable weather conditions. Other areas, such as Greece and Turkey, are taking advantage of this. Dutch and Belgian cherries are also being sold for high prices, but those are mainly intended for the domestic market. Due to the high demand and low supply, the cherry season is expected to finish earlier than usual in some countries. For its part, New Zealand sees opportunities in the market and is working on producing high-quality cherries for export. 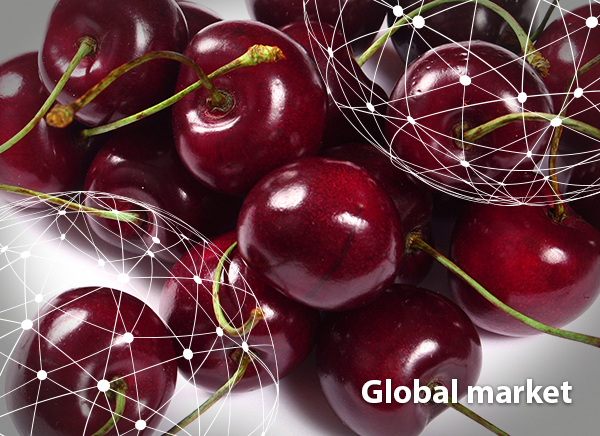 Netherlands: Cherry growers benefit from low European harvest
The Dutch cherry season is currently in full swing. According to growers, sales are going well. The cherry supply in Europe is quite low and Dutch growers are taking advantage of it. The Dutch cherry harvest is also slightly below average. Domestic sales are still very important for Dutch cherries. At the moment, there is also some demand for Dutch cherries for export, but according to the growers, the export market will always remain a niche market. There is currently a bit more competition from the Greek and Turkish cherries. Dutch growers and traders are angry about these cherries still being available in the retail while the Dutch season is in full swing.

Belgium: High demand and smaller volumes
This year, the Belgian cherry season started about 5 to 10 days earlier than average. The early cherry varieties have recorded very good sales, but the later varieties are also in great demand, which entails nice prices, according to a trader. Due to the frost, an estimated 30 to 40 percent of the cherries have been lost. In terms of volume, this is comparable to the cherry season of 2018. A Belgian trader is very satisfied with the quality and size, but given the amount of rain that has been recorded in recent weeks, there is also a chance that cherries may burst.

Germany: Moderate yield for German growers
“Cherries are a standard product during the summer season, but this year, the domestic harvest was clouded by uncertainty for a long time because of the night frost and possible frost damage. So far, however, things are not going so bad,” says a trader. “There is currently a sufficient volume available. Wholesale prices for domestic cherries amount to around 6-8 Euro / kg, depending on the size. The 28-30 mm ones are available in large volumes. On the weekly markets, however, the large sizes are in great demand, and their supply is currently limited.”

So far, it has been a disappointing year for growers. Frost and other problems have resulted in moderate yields. "That of 2020 is still one of the worst seasons I've ever experienced," said a grower. Nevertheless, the largest growing areas, including the Fränkische Schweiz in southern Germany, are not expecting any shortages.

The foreign supply comes from countries such as Spain, Greece, Italy and Turkey. Depending on the origin, prices are up to 30% higher than last year.

United Kingdom: Growers are happy with the season
The cherry harvest started for a Kent grower at the end of June. The rest followed on July 1. The growing season went okay. Northern winds caused some reduction in the volumes during the blossom, but other than that, it went well with the flowering. The quality is good, although there is a shortage of large sizes. Still, there's no reason to complain about the Brix and taste. The demand for cherries is high.

France: Bad weather hindered cherry picking
The cherry season is over in France. The country hit the market a little earlier than usual due to the bad weather and abundant rainfall. This took a toll especially on the early cherry variety Burlat, whose quality is not very good this year. The weather also had an impact on the cherry harvest in other regions. Later in the season, the situation improved for the later varieties.

Italy: High demand and low volume result in high prices
The cherry season in Apulia will definitively come to a close by the end of this week. Both the extra late varieties (few of which are grown) and the Ferrovia in the colder areas of the region (including Gioia Del Colle and Cassano) are currently being harvested. Due to the limited volumes and sufficient demand, the fruit is sold for a high price. The mountain cherries of the Venice region are doing well; the 26+ sizes are being sold with ease. The mountain cherries of Venice arrive in the market later than in central and southern Italy and take an interesting market share. The harvest continues until after July 15 and the fruit remains available until July 31.

The marketing of Val Venosta cherries is starting a few days earlier than usual thanks to the good season and more favorable temperatures. The Regina and the Kordia have both found their place in the Val Venosta / Vinschgau, between 800 and 1,300 meters above sea level, where they have the ideal climate for their growth. Volumes are comparable to last year's and are estimated at 500 tons grown on 40 hectares of land. Until the first week of August, the cherries are sold all over Italy by traders and retailers.

Spain: Higher price will not compensate growers for reduction in the volume
The cherry season is almost coming to an end in Spain, as most of the fruit has already been harvested, with the exception of the cherries on higher orchards in the mountain regions. In general, this season has been characterized by the very low production volumes. It is a result of the impact of climatic setbacks, such as heavy rain showers, but also hail storms in some regions. Almost all Spanish cherry growing regions and the rest of the Mediterranean have seen their harvest reduced. Prices are therefore better than in the previous season, but do not compensate for the significant reduction of the volume. Given this year's low supply, Spanish companies have mostly been exporting to the European market, as the many restrictions in air freight have made exports to faraway destinations unfeasible.

Turkey: More new markets for Turkish cherries
The Turkish cherry season has been going well so far and growers report that the quality has been very good in the last few decades, with demand from various markets. China in particular is becoming an increasingly important trading partner for the sale of cherries. The coronavirus has hardly had an impact on the cherry market in Turkey. Air freight to China has been somewhat more difficult. In the European market, where all the fruit is shipped by truck, there were also hardly any problems for the Turks.

China: Less import of cherries, but the market is recovering
After the California cherries, those from Washington followed in early June. The prices for the cherries have been high due to the small volumes that were exported; however, they show a downward trend since early July. The easing of the crisis on the domestic market is allowing for increases in the purchasing power of Chinese consumers. As a result, the demand for cherries from online consumers is picking up again.

The import volume of cherries in this quarter has been significantly lower than in the same period last year. About 85% of Chilean cherries arrived in China this year before the Chinese New Year. At the end of January, with the outbreak of the coronavirus, the market was sluggish and importers no longer dared to buy cherries. The amount of cherries arriving at the port of Shekou dropped sharply to about 100 containers in April. After the end of the Chilean season, the United States took over, but sales were difficult. This was due, on the one hand, to the trade conflict between the two countries, which resulted in higher tariffs on imported fruit, and on the other hand, to the poor logistics because of the coronavirus.

United States: Season finished earlier due to strong demand and low supply
There is a shortage of US cherries this season. Growers in Washington State report that they are in the middle of the season. Spring frosts and other adverse weather conditions have cut yields in half compared to previous estimates. There are large-sized cherries on the market and the packing for supermarkets is going well; however, the supply to the warehouses is currently lagging somewhat due to the rainfall in the region. Cherries now come mainly from the Yakima Valley and Quincy, and there are early varieties from the River Valley. The yield per hectare has been reduced from 8-10 tons per hectare to 2-4 tons per hectare.

Meanwhile, the demand for cherries remains strong, which means high prices on the market. Some growers report price increases of up to 50% compared to last season. Due to market shortages and high demand, the season is likely to be over around August 5, a week earlier than usual. The peak in the season is expected between July 8 and 11, after which there will be a downward trend.

Canada
US' northern neighbor Canada is also facing a challenging season. British Columbia’s South Okanagan Valley started cherry harvest in mid-June. Numerous weather events in the winter and spring took their toll on the blossom, with some orchards barely having any fruit set at all. Others have perhaps 70 percent of a normal crop. Moving further to the north through the Okanagan Valley, there appears to be less fruit. Overall, the BC cherry industry expects to be well down on the volume that was originally anticipated for 2020.

Australia: Highest share for exports this year
The President of the Cherry Growers Association stated that while the harvest, as growers report, has been reduced, exports have taken no step back. In fact, the share of exports is the highest ever for the Australian market. This makes it clear that the future of Australian cherry producers is mainly linked to that of the export markets.

New Zealand: Strengthening of the market position
A new company has been established in New Zealand: Deep Creek Fruits, in order to set up two cherry farms in Central Otago. One of the main goals is to take advantage of the rising global demand for cherries from New Zealand, with Summerfruit predicting 40 percent value growth for New Zealand's cherry exports over the next 20 years. The sector has achieved strong long-term growth. Deep Creek Fruits will ship its first top-quality cherries to the global export market in the summer of 2021-2022. The cherries are harvested from December to February.