Upcoming Polish apple harvests will be lower than 5 year average

With the Polish apple exports being completely over, one Polish exporter is already working towards the upcoming apple season. Although volumes will be better than last year, they’ll still be lower than the 5-year average for Poland. It will be a season of uncertainty, as long as covid-19 still roams the planet.

The weather has been good to the Polish apples recently, but spring frosts have caused the potential volumes to drop significantly, says Genesis Fresh manager Jan Nowakowski: “The export for Polish apples has probably completely stopped by now, with remaining stocks being destined for the local consumer. So we’re already looking towards the upcoming apple season, which has had its ups and downs already. Both in early and late spring, we experienced heavy frosts in Poland, which has resulted in significant volumes of apples being lost. However, since that time the weather has actually been perfect. It was expected we’d be getting a very dry summer, but both the end of spring and summer so far have actually had sufficient showers. Therefore, bar any weird weather situation, we expect the apple season in Poland will not be delayed.” 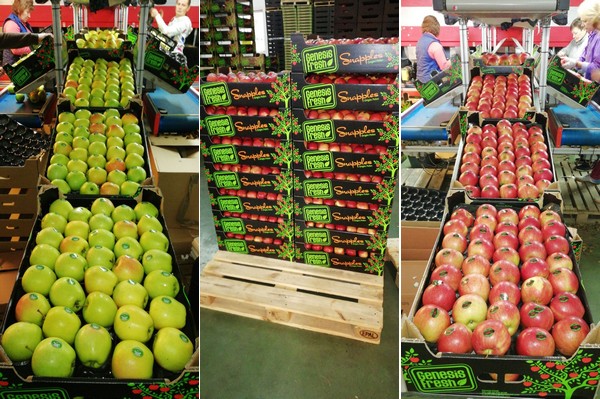 Volumes will not just be lower for Poland, but also other European countries. “There will be no such thing as a bumper crop for Polish apples this year, despite the weather being so perfect now. The frosts we experiences caused us to lose quite a large amount of produce. Overall apples volumes will be higher than they were last year. But if we take a five year average, we’ll for sure be below it this season. And it’s not just Poland that has to deal with it, as we’ve seen multiple countries toning down their expectations for the upcoming season. Countries like Holland, Italy and France will have lower production in certain regions.” Nowakowski explains.

Next to the weather, a major factor in both previous season and the upcoming one is the existence of the coronavirus. According to Nowakowski it will be very hard to predict what the prices will be once the new crops arrive. “The upcoming season will be very unpredictable, given the pandemic situation around the world. Covid has had a very big impact over the past few months, and we’ve learned a lot during the chaos that ensued. But nobody can predict what effect it will have on the future, like prices or demand. Currently prices are very high, due to lack of Polish apples on the markets. Prices are so high now, that people just don’t even want Polish apples. However when the new crop arrives, we hope prices will simply be back to okay.”

There’s not a lot an apple exporter can do about the uncertainty that the virus brings. Nowakowski states there’s no other solution but to be flexible, while still planning ahead as much as you can: “Covid itself probably will not leave that big of a mark on the industry in the big picture. Some will say people are shopping more from home now, but is that really a result of Covid? Isn’t this simply a process that was already happening, but was now accelerated due to the pandemic? Smarter and faster shopping has always been an advantage for consumers. What effect it will have on the upcoming season is near impossible to predict. We’re expecting that we’ll have good exports, good crops and good quality. But the situation can completely change if there are large outbreaks in the world. Overall, we’ll be planning for the long term of course, but we also have to be flexible and adjust to whatever the situation requires from us!” he concludes.