Spain: Agriculture and its seasonal workers, the new victims of COVID-19 rebound

Towards the end of June, four Aragonese counties (three in Huesca and one in Zaragoza) became the focus of the resurgence of the virus in Spain. These parts of eastern Aragon, in the area bordering Cataluña, were the worrying evidence that the virus was still active and that, at the slightest opportunity, it multiplied dangerously. The relevant fruit sector of the region became doubly victimized: firstly, because it was fully affected by the disease; and secondly, because of the risk of stigmatization.

All the outbreaks had their epicenter in groups of seasonal workers or farm workers. The health authorities have not confirmed the origin of these outbreaks, but it is suspected that the outbreaks in Huesca are related to a party attended by several young farm workers a few days ago.

As of 24 June, the active outbreaks in Cataluña were located in the health district of the province of Lérida, where there had already been an upsurge of cases concentrated in a slaughterhouse. Subsequently, live outbreaks started occurring among groups of seasonal fruit workers, compelling the regional government to close the entire county, including its capital Lérida. 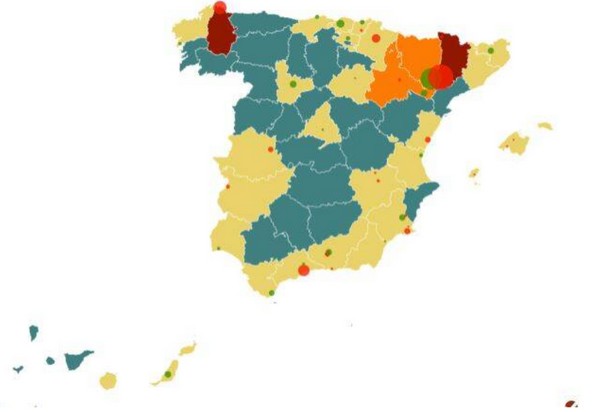 Map of the new coronavirus outbreaks in Spain

Now there are about 30,000 seasonal workers working in the region who, in principle, will not stop their activity. Entrepreneurs in the sector defend that growers are following "strict monitoring of COVID-19 prevention measures". In the case of the seasonal workers, the risk of contagion is due more to the unworthy conditions in which many are forced to live than to the work itself. Organizations such as SOS Racism and the Fruit with Social Justice Platform deplore the "vulnerability" of seasonal workers.

Up to 15,000 foreigners usually come to the Aragonese fruit campaign, mostly from the Maghreb and Eastern Europe. As in Cataluña, there are floating populations that arrive without a contract and settle down in irregular accommodation or in excessively shared housing. Town councils, urged by these realities, have been in charge of fitting out municipal pavilions to welcome in an orderly fashion those who have settled in the area without work, with precarious hygienic conditions and without regulated accommodation.

Remarks by the Agriculture Minister
In response to questions from the press after a meeting on the olive sector, Minister Planas linked the reappearance of the disease among foreign seasonal workers in Lérida and Huesca to housing and transport conditions, "not to the work they do on the farms".

The minister also showed a concern for social issues and noted that in agriculture "as in any other sector there is an overwhelming majority of people who do it well". He added, "One cannot characterize everyone by a few" and considered that the management of this workforce "deserves all the respect for the laws and working conditions".